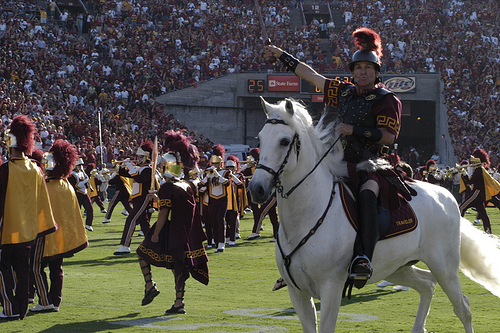 This week we go with a traditional power house of mascot-dom with the University of Southern California Trojans.  Every time we see the beginning pageantry at a USC football game, we are always shown some guy stabbing the field.  It’s a long standing tradition and for some reason riles up the crowd.  After researching the Trojans on the terms of mascots,  I’ve come to find a couple of facts I did not know about the USC Trojans.  And no, one of them is not Will Ferrell being a mascot. 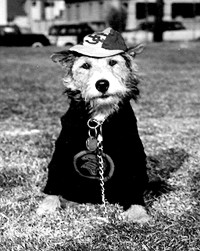 I was sure to read about Tommy Trojan becoming the first official mascot at some point, but to my surprise he was not the first official mascot.  In the 1940’s a stray dog running around campus chasing tires had that distinction.  Thus begat George Tirebiter.  As you know, we here at KCCGD love irony, and we got a full taste of it when we read on to learn that George ended up run over by a car in 1950.  USC held a public funurel and just 3 years ago, the revealed a statue commemorating the poor pup.

Okay, so Tommy Trojan wasn’t the first mascot.  So he’s the second one.  Wrong!  Tommy Trojan is not the official mascot, but the horse he rides in on, Traveler, is the official mascot.  We were led to believe that since he stabs the field with the big ole sword that this guy would be the mascot, but we were wrong.  Thanks, Brent Musberger.  Not only that, but the guy riding the horse isn’t officially Tommy Trojan.  He could be a loony in a metal can for all we know.

There is much confusion here.  Is it the horse, the guy, or the dog?  Before it seemed pretty cut and dry.  But now that we know the story, the power just doesn’t seem to be there.  We’re gonna go with the official word here and stick with Traveler.  But we really wonder if it would make life easier and just have Tommy Trojan be the mascot. 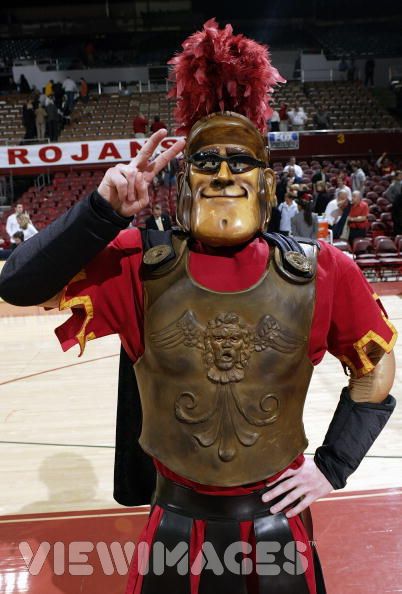 So where does Traveler fit in with the mascot world?  Well since we assumed it was somebody else, not so high.  We like Tommy Trojan, and even George Tirebiter has an appeal much like other universities who use dogs as mascots.  The horse just doesn’t do it for us.  If we saw Traveler, Bevo, and Ralphie coming our way, we’d be least afraid of Traveller.  It’s time the University of Southern California make the jump to Tommy.  Tommy can you hear me?  Can you feel me near you?