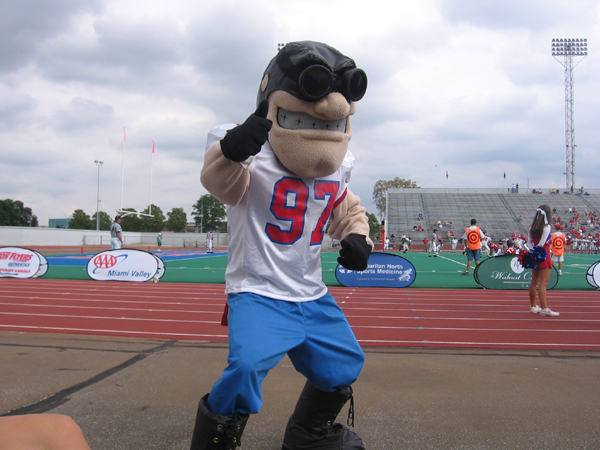 Hey hey hey! Some mascots practice in the off season to get their moves right.  Some study film tapes hard to make sure they are entertaining to the highest degree.  Then there are some mascots, like the University of Dayton’s Rudy Flyer, who just chill out and surf the web.  Cruising around the internet hitting up social media sites is what he does and when he has to bust a move, he’ll drop it like it’s not.  This week we are cruising on autopilot with Rudy Flyer.  You are now free to move about the blog.

The University of Dayton employs as its mascot to the sports a one Rudy Flyer.  Historically, we have no clue where he came from.  According to the school’s Wikipedia page, the name is a take off of the school’s initials (that would be a ‘U’ and a ‘D’, UD or Rudy get it?).  The Flyers nickname and subsequently Rudy’s last name comes from the Wright Brothers.  They apparently started their life’s work there.  But really, when you’re as busy as Rudy Flyer, do you really have time for a traditioned history? 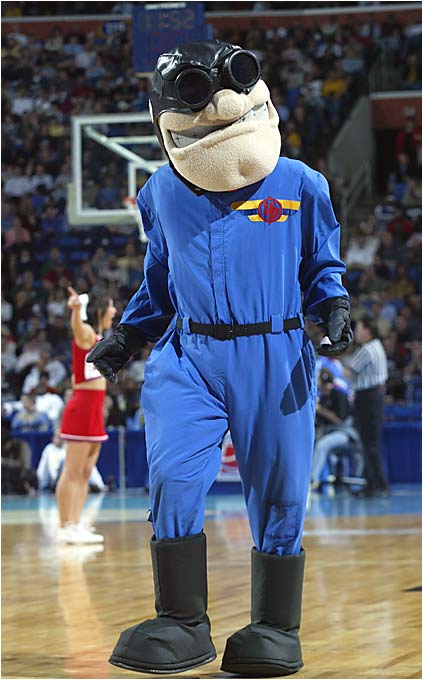 Rudy Flyer’s digs comes from the best your local mall has to offer.  No, not Forever 21, but the local flavored luggage shop.  Rudy likes to fly, in case you didn’t notice.  The stylish old time air goggles mixed with the ultra loose jumpsuit and massive moon boots get Rudy for any high flying adventure.  The belt cinches the bagginess just nicely, a trick he learned at the Gap.  When he’s feeling really raunchy, he’ll don a red cape that flutters ever so gently in the wind.  Look out world, a super snarky mascot is coming in for a landing!

So Rudy doesn’t offer much in actual mascotting.  We’re sure he does great stunts on the court and has some super mega signature move.  Without being all Perez Hilton, we really need to find some more dirt on this guy.  But since we don’t, we’ll just judge him in the most shallow way possible.  His clothes are way too flabby.  We don’t know what he’s hiding under there, but maybe some Pilates would help clear that up.  What about the goggles?  We say show your baby blues and don’t be afraid of who you are.  Lastly, axe the boots.  That’s SO 2004.

While Rudy isn’t busy on the court, he is busy being a mascot dive.  Check out his MySpace page for latest updates.  The metro-mascot was even witnessed hanging out around Playboy’s party pad.  If you have any questions, hit him up on Twitter (@rudyflyer), because instead of practicing routines, he’d rather tell us what he had for brunch.  A bagel with cream cheese and a slice of mango.

So the next time you are out jet-setting, being all 24 hour party people, keep your eyes peeled for Rudy Flyer.  We’ll stick with some actual mascot work but if you up for all flash, then Rudy’s the guy.  It’s no surprise that the University of Dayton seems to take a back seat while this guy mugs for all his narcisist needs.  Hey part of mascotting is flash and style.  Rudy Flyer just lacks the substance.  Now excuse while we Twitter about Mark Mangino’s breakfast spread.  140 characters and 140 tons.