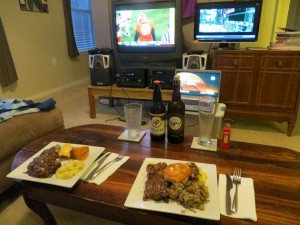 It was a four day weekend and it was sorely needed.  I took the time to make some awesome, and first ever hosted, Thanksgiving Day meal   I went the non-traditional route, which is something you need to expect when reading the feedings.  I cooked up some sauerbraten  and served it with a whole bunch of side dishes.  It was awesome.  What was better was having it for leftovers on Saturday. 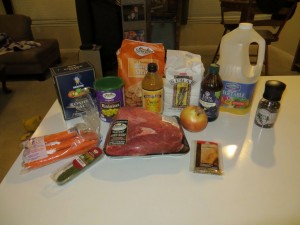 Okay, since I made a whole ton of stuff, here’s the links to each thing.  It took so long to do.  You will have about a day’s worth of prep and cook time there.  It will be spread apart a couple of days too.  But it’s totall worth it.  Here’s the links to the eats: 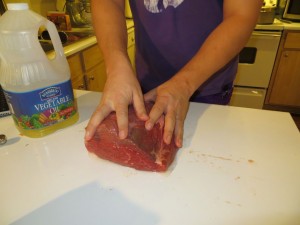 Altogether it was a tasty combo.  The saurbraten was tart and the meat was so lose, it work perfectly, especially with the sweet sauce made from gingersnaps.  The asparagus simple to make and goes a long way in taste.  The potatoes grand mere is quite possibly the best way to have potatos as the creamy suace softens up the start perfectly.  The brioche rolls were lemony and dry enough that it was beginning to be dipped in butter or sauce, with tasty outcome.  And last the pumpkin pie was heavenly with some whipped cream topping to send it all on home.

Now I admit, this is the second time trying to make sauerbraten, with the first not ending out too well.  We didn’t leave enough time to marinate the vinegar heavy sauce with the meat.  Because of that, the meat came out tough.  Well this time around we left time and then some and the meat just fell apart in our mouths.  The sweet and sour combo put it over the top.  In fact, I dumped the sauce on all of the sides for great results. 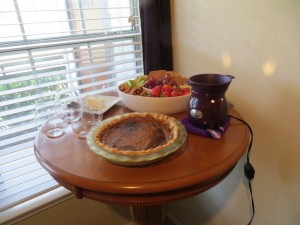 We had some other things there as well.  We had a Velata melter with some chocolate and various dippings.  It turns out the chocolate went very well with the pumpkin pie.  We also had some guest chicken liver dressing.  I guess the guest didn’t tell us it was chicken liver until after we ate it.  I don’t know why.  I’m more of a gizzard man myself but the liver did fine in the dressing and it had the consistency and taste of a sausage.  So that worked for me.

On to the pairing.  It’s quite difficult to pair the beer correctly so I just went with Adelbert’s Brewry’s Collaboration Gypsy IPA.  It’s a combo white Belgian with an IPA.  It was just hoppy enough to tell me it’s an IPA but had some smooth and clear undertones to bring out the Belgian.  It worked great with the meal.  There were plenty of sweet and sour collisions already in the meal that the Gypsy IPA did it’s job to server both.  It’s a nice beer but it’s not a world killer.

So that was the football feedings, Thanksgiving style.  Yeah I went non traditional, but it proved to be an adventure in taste.  Also, the leftovers for Saturday made it even more enjoyable with the stack of upsets and rivalry based games that filled the television screen.  I hope everyone gets a chance to have this recipe and I hope everyone had something to be thankful for from this holiday weekend.