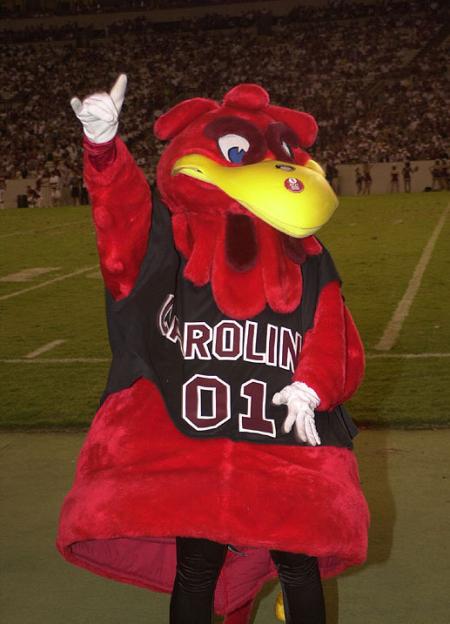 This week on Mascot Monday we take a look at Phil Steele’s #21 pre season top 40 team in South Carolina and their costumed buddy Cocky.  Yes, the Fighting Gamecocks have a high falootin’, arrogant little bird named Cocky.  We’ll find out whom he took over the job from as well as some other moments in Cocky’s history that let him to his current winning attitude.  We’re counting down the rest of the mascots we’ve yet to cover leading up to the final Mascot Monday of the year.  After that, it will be football time and no more mascot for the rest of the season.  Now, let’s check out Cocky.

The University of South Carolina opened up in 1805, but did not field a football team until 1892.  On their own dime, the coachless, unsanctioned team rode into Charleston on Christmas Eve to play Furman.  They lost, but the football tradition continued on.  That is, until 1906 when the Board of Trustees banned the sport because of some vicious smack talk heard from the fans.  That kind of passion turned the decision around the next year and the South Carolina Fighting Gamecocks, a name bred out of the local paper in the early 1900’s, have been kicking up dirt on the field ever since. 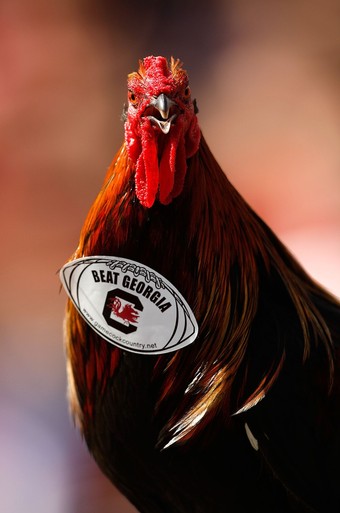 We couldn’t dig up as much information as to when the school officially started employing the services of a mascot, but we do know that Big Spur was around first.  Big Spur is a live gamecock perched on the sidelines during the games.  We think it was an on again, off again type deal.  Big Spur currently has his place but it seems like at some point he disappeared.  Or at least, that explained why Cocky showed up.

Cocky first made his appearance after taking over for Big Spur at the 1980 Homecoming game.  The story goes that Cocky was the son of the real deal Big Spur.  So Cocky struts on the field while Big Spur sometimes watches over.  That strutting let to both a Universal Cheerleading Association mascot championship in 1986 and 1984 as well as the Capital One Mascot of the Year in 2003.  Nevermind the fact that he also took home the NCA Mascot National Title in 2009 and was a member of the Capital One All-American Mascot Team 5 times.  Yeah, this guy has the talk to match the walk.

Sometimes brining home the gold via the mascot can be great for universities, sometimes it hides the fact that the real teams can’t win.  For South Carolina, it’s the latter.  Their 19 athletic teams won only one national championship and that was the baseball team just this past month or so.  We’re thinking that the mascot titles handed out are for schools that can’t cut the mustard on the field.  If South Carolina was a national juggernaut, would Cocky have some many titles?  Even Iowa State’s Cy brought home a national title.  Exhibit A. 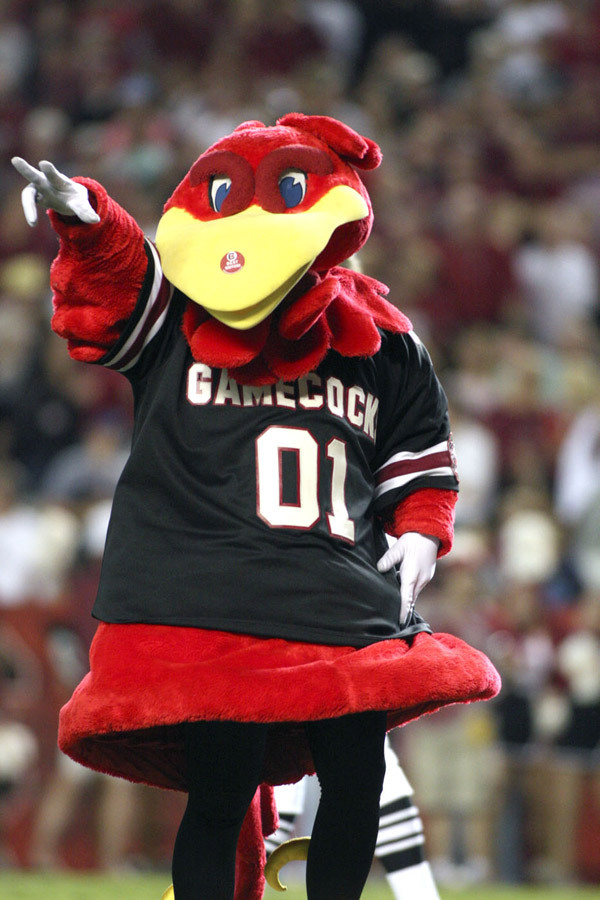 Now whether it was out of pure talent or sheer pity, Cocky struts on the field with mascot gold spilling out of his pockets.  If we or anyone else were in the same position as Cocky, the same thing would happen.  He won those titles and he gets to tell everyone around him that he is the best.  Let’s just go ahead and forget that the costume looks like a flatten, wrinkled version of a rooster.