I was running a little behind this week, so after popping into Toto’s for a 5 shot Depth Charge, I ended up thinking of a black hole. Driving to Johnny’s Tavern confirmed that for me. I grew up around that area, but Corinth Square had no footprint in my memory. It all seemed new even though I used to live so close to it. With Johnny’s being a KU bar, I continued the black hole idea by doing the first natural reaction this Yeti has with KU stuff: going to the bathroom.

Really I can set my rivalry aside and enjoy some sports from the other side’s establishments. If not but for the sake of the blog. Plus I thought it was cool that I was the only one wearing purple in the place. Johnny’s Tavern in Prairie Village not only has nice bathrooms, but the general setup reminded me of a basement. It was darker than normal and the TVs (most regular big and small screen with some HD) made me feel like I should be in a couch. Too bad there were no pool tables or it would be a cinch. They did have Silverstrike Bowling, Golden Tee, Touch screen games, and NTN which I’ll get to in a bit. 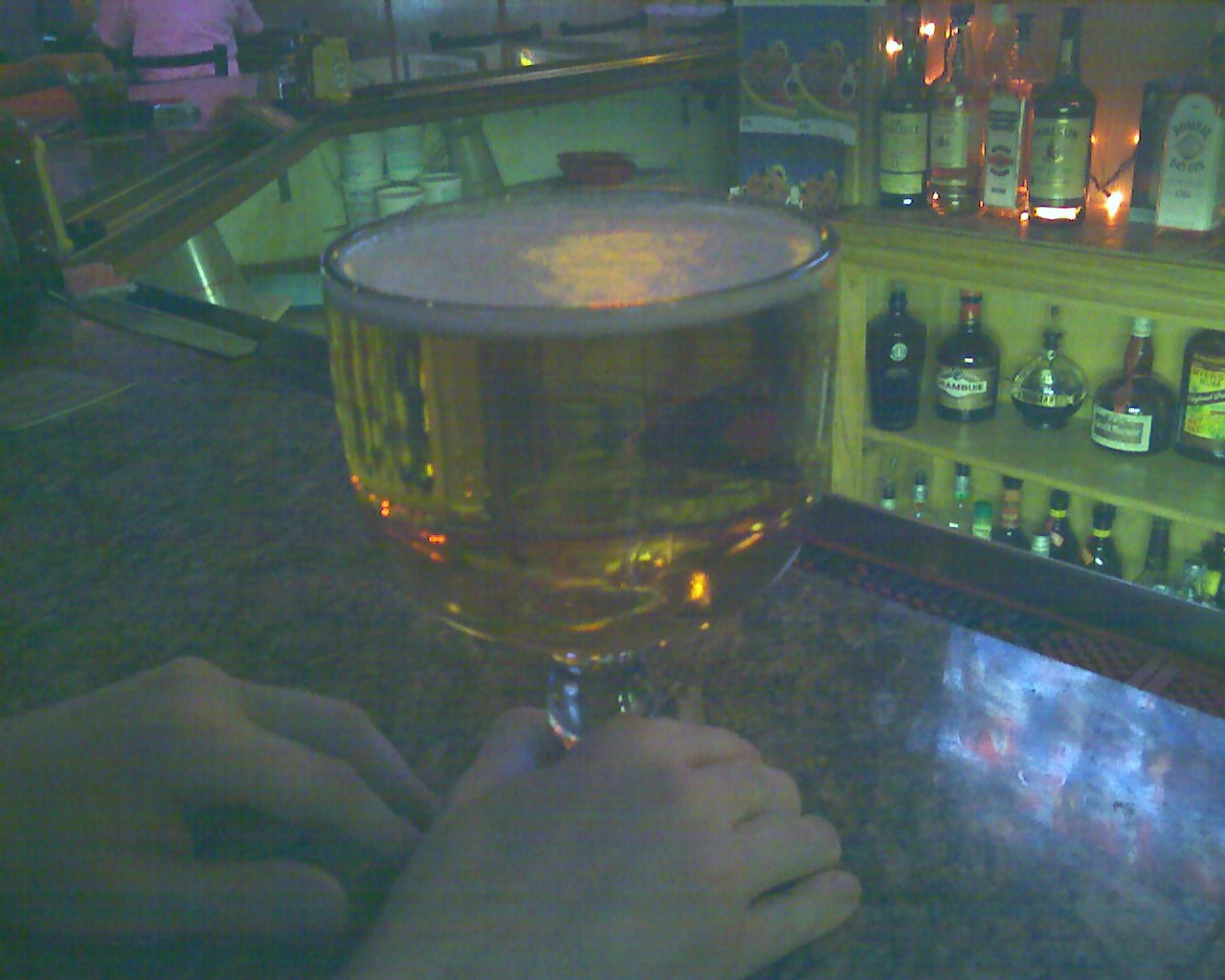 Most of the service came to us in the form of a bartender named Curry. I’ve heard of alot of different names for people (especially in last couple of days), but this name nears the top for uniqueness. She did a pretty good job even though the Sooner tool at the bar stiffed her. Timbo showed up a little later and we split some mini burritos and KC style chicken quesadillas. The only reason it was KC style was that it had some sweet BBQ sauce in it and it kicked ass. Timbo also tossed down Johnny’s own Scooner and as you can see from the pic, it was quite the chalice of barley pop.

In between finger food and football, I fingered my way into some NTN Trivia. If you are not familiar with NTN, it’s the little blue devices you see in bars where you can sign in and rock out with some trivia. Not to toot my horn, but I am a well of useless knowledge and can do pretty well at most Trivia games. So this Game Day would be the one where I actually signed up for NTN Trivia.

I, like most people (and yetis), would just plop their name in and mash the number buttons to answer the questions on the clock. But this time, I decided to go through and lock up a profile so I can keep track of how I am doing. What’s great about NTN is you can log on and play with your profile at other brand locations. The trivia part was easy, but I’m still having a hard time changing my home location to some other place. The website is great for forums and stats, but there’s no clear way to change that one important piece. I can’t have my home site be a KU bar. Tune in for updates.

The football for the day started out with the big time games of Oklahoma vs Iowa State and Texas vs Baylor. I was fully expecting to run up the score on the trivia like the big boys of the Big 12 south were supposed to run it up on the weak competition. But as this year proves, the small teams have a voice as well. Iowa State actually led by a touchdown at half and Baylor was just a close. Of course, the expected teams won, but there was some added drama to help swell the day.

Missouri vs Texas Tech were up next in what was billed as the shootout of the day across college football. Somebody should’ve told Pinkle that. The Tigers ended up rolling the Red Raiders much to everyone’s surprise. I still can’t figure out what impressed me more: Missouri running the ball effectively without Tony Temple, or Missouri’s defense shutting down Texas Tech. It looks like the game at Arrowhead is getting bigger and bigger by the week.

The other contestant for the Border War (it’s still called that in my book) is KU and they were up against a dangerous Colorado team in Boulder. This was KU’s first game outside the state of Kansas so some Jayhawkers at the bar were nervous. It was good to see that the bar was packed with supporters and not basketball in sight. The game was a defensive one and took some trickeration to bring up the score. I especially like the family Hawkins’ fake fumble playaction play for a touchdown. It wasn’t enough however, as Kansas manned up at the end and stopped Colorado from coming back.The Kansas State Wildcats also had a game against the Oklahoma State Cowboys but for some reason, the game was not televised. And what a revolution of football it was, even though the highlights were in box score format. I listened to the game on radio a bit on the way to Timbo’s house to play some Wii, and that was the only piece of the drama I could latch onto. Will somebody knock down the doors of the Big 12 offices and get them going on a TV contract that shows all of the football games? The Cowboys beat the Wildcats on a last second field goal in what was the real shootout of the day but no one got to see it. Yet we are treated with Oklahoma and Texas teasing the mouse before killing it after 3 hours. Let’s hope the new Commissioner sets this right.

Will I come back to Johnny’s Tavern? Ever since I moved out of the black hole that was my parent’s basement, I still have a piece of my heart left there. The answer? Maybe. It’s still a KU bar. They could use some more HD flat screens than some of the junk big screens they have there, but it was a sufficient for a solid day of football. The trivia also warmed up my fingers for some Wii Play later that night.