The first signs of winter hit early, as I strolled out of my apartment complex.  The slight snow drizzles gently floated in circles as I made my way for the cold north toward KCI and Dirk’s Bar & Grill.  The week of football was a quiet one, but the cozy den of Dirk’s kept things nice and warm.  It’s not the best barspot, but it was a welcomed distraction from the day’s weather and games.  Too bad it didn’t distract from Nebraska fans hanging out there. 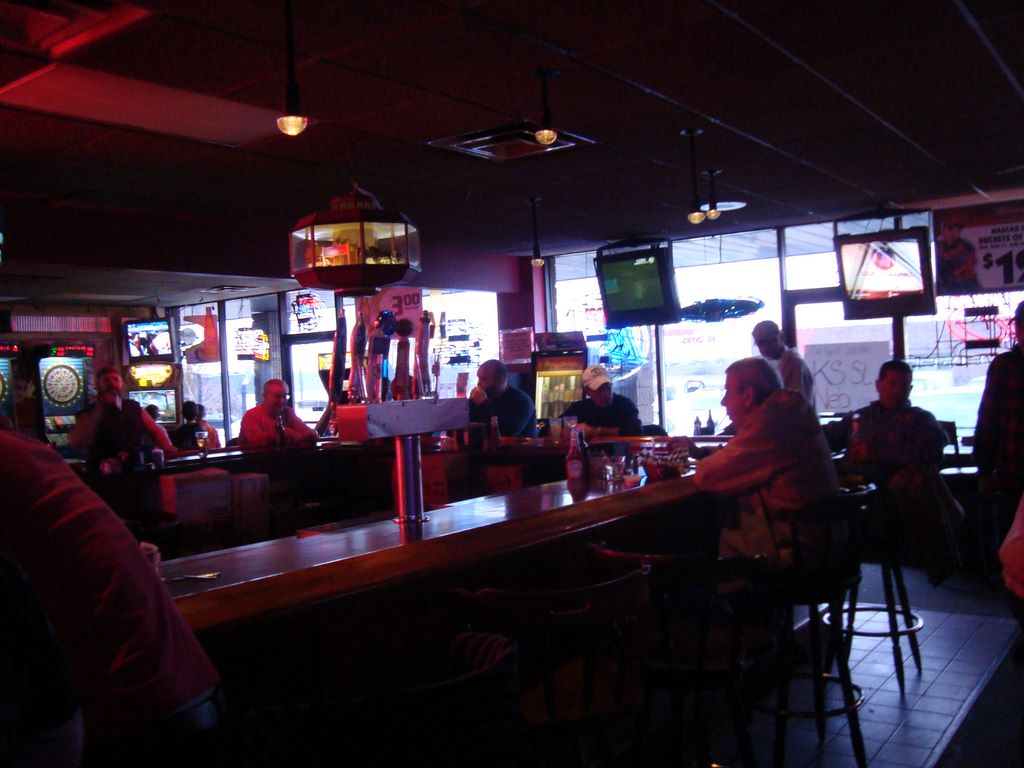 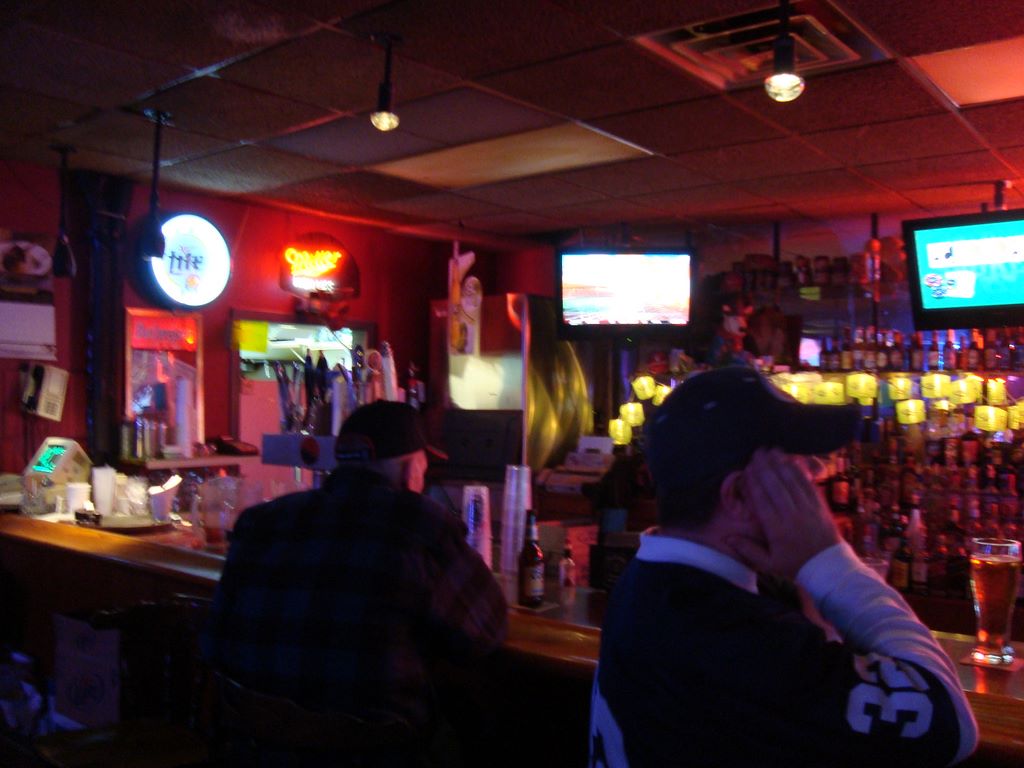 Entering Dirk’s, one can note the out of way location compared to Zona Rosa.  It’s tucked down south of the fanfare of the shopping areas and looks weathered in its strip mall setup.   They have most of the bases covered for a good bar.  There are big screens, analogue screens, and one flat screen all with a satellite package for college football.  Now all they need is some high definition. Well that and there were some sound issues later on in the day that they need to resolve. 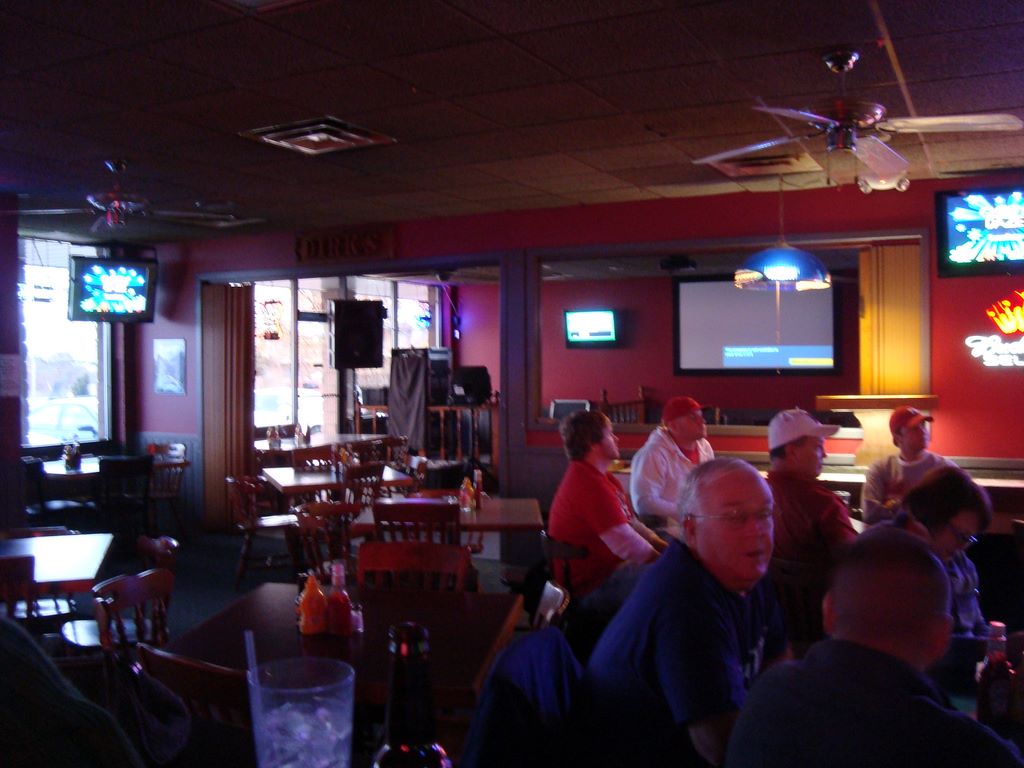 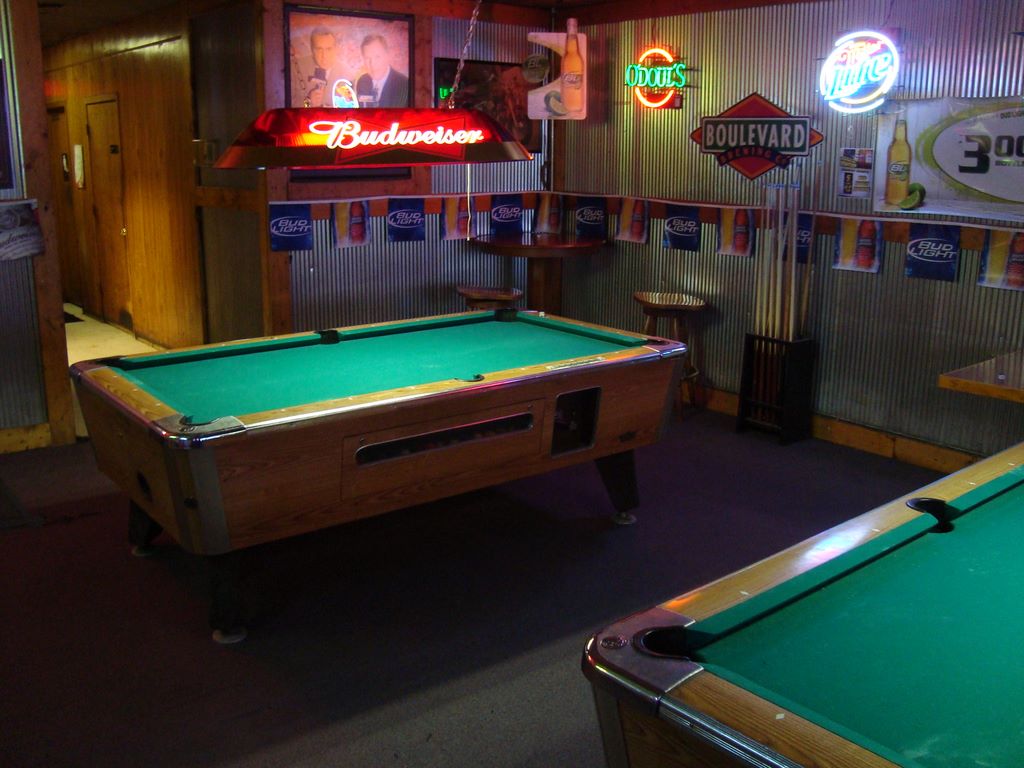 The massive karaoke room located on the left hand side stands out from the rest of the activities that you can do at Dirk’s.  Video game wise you have Buck Hunter Pro, Silverstrike Bowling, and some NTN Trivia to help pass the time.  If you’re feeling real active, you can partake in the huge shuffleboard in the center of the bar or the darts and pool tables in the right hand side.  If you’re not feeling active, however, you can buy smokes from the cigarette machine.  You have to light up outside in the makeshift patio, though, due to the smoking laws.  We love the irony. 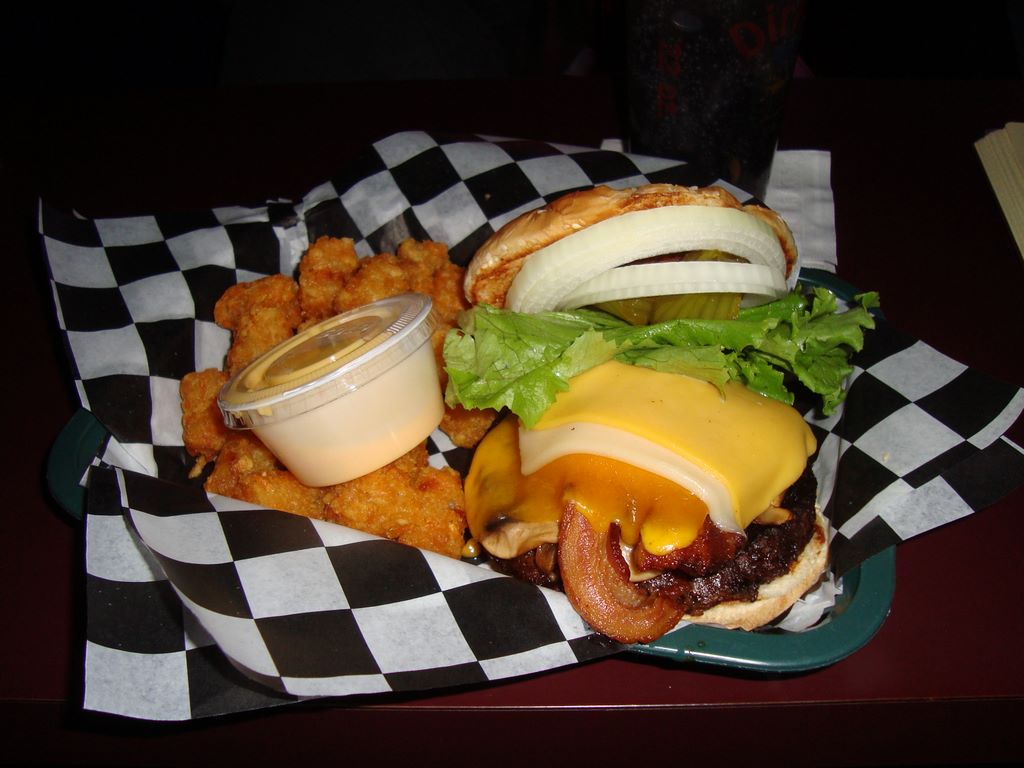 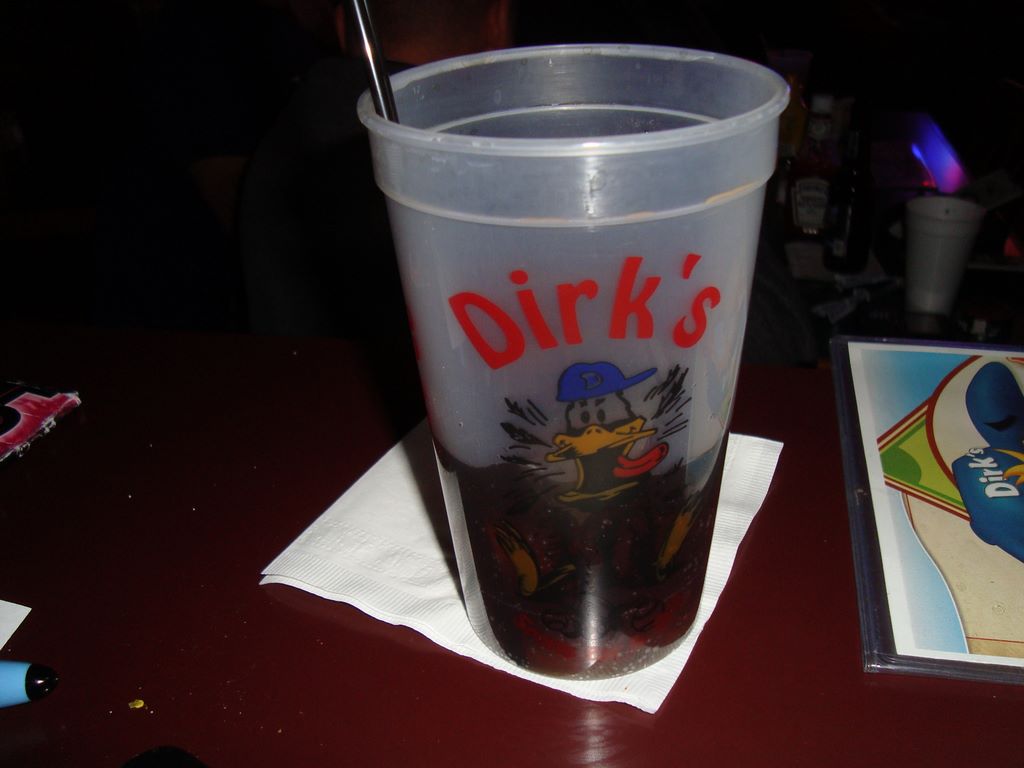 We really didn’t love the service.  It was way better than the travesty at the Quaff last week, but it could use some work.  The waitress mirrored Dirk’s facade, wheezing her way toward us to bring us our eats.  There were no drink specials but at least soda refills were free.  I had the Bad Boy Burger and I really wished they asked how I liked it cooked, because the burger portion came out a little burnt.  The stack of cheese, shrooms, and bacon made up for the puckness.  Plus the real crispy tater tots.  It was a half full cup experience. 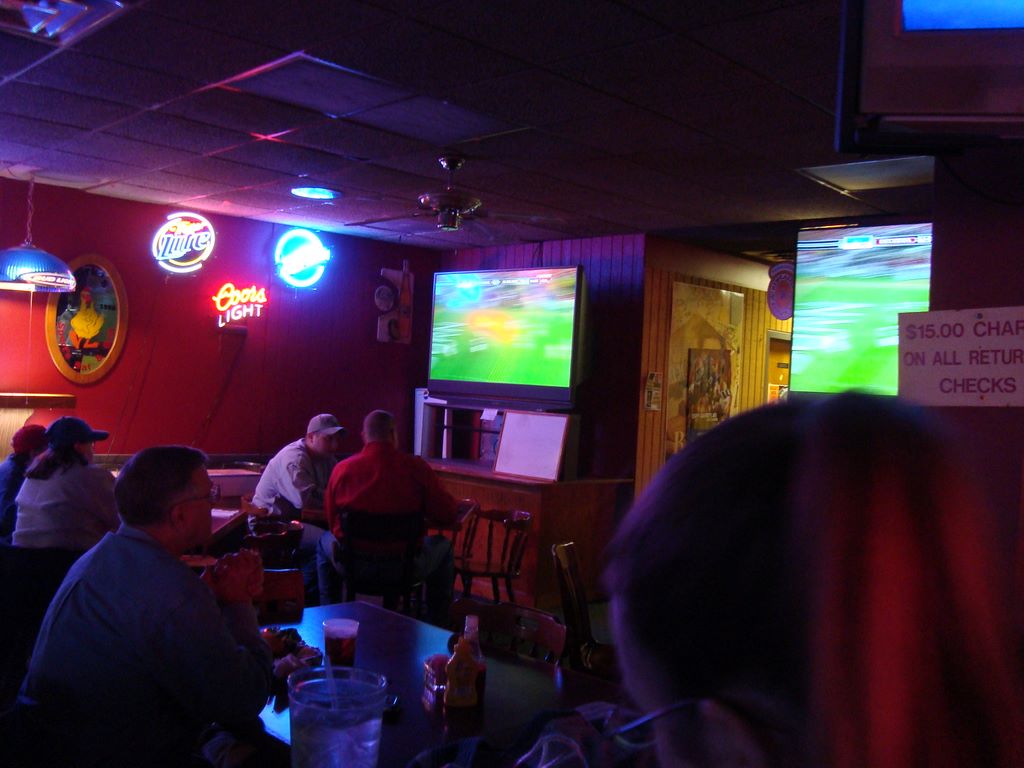 The football for the day was more of a half empty experience.  The games we watched were not competitive at all.  The South Carolina Gamecocks came up limp to Florida’s Gator strong offense.  Northwestern delivered Michigan their most losses in a season in 129 years of Wolverine football.  Georgia barely overcame a rowdy Auburn Tigers team.  After halftime, Alabama made up for two straight losses to Mississippi State and rolled them handily.  The only real surprise was Troy of all teams beating up on LSU.

No surprises at all Big 12 wise.  The original prediction was correct, as it truly was the calm blowouts before the storm of big games coming this Saturday.  Kansas let go in the second half and lost big to the Texas Longhorns.  I guess they have fallen back to earth, good luck in your bowl game guys.  Because of the KU loss and Missouri’s pummeling of Iowa State, the Tigers clinched the North division and are getting ready to play spoiler.  After they take on Kansas in Arrowhead.  Baylor beat up on Texas A&M and Oklahoma State beat up on Colorado.  The Kansas State game was super terrible as the Cornhuskers trounced Kansas State so bad in the first half, we had to leave Dirk’s.  What made it worse was having to hear the Nebraska fans yammer on about the game.  The video shows why I don’t like Nebraska fans.

Yes, we had a friend celebrating a birthday at Lucky Brewgrille so we ended the massaccre short and headed down there to drown our sorrows in some frosty beer.  The games were boring and Dirk’s was boring too.  I’m sure the karaoke at night will light things up over there.  Really, Dirk’s has all you need but they could use some high definition to really spruce the place up.  From what I’ve heard of the other places in Zona Rosa, it’s the best sports bar around.   Now that the weak week was over, we are warming up for the big week ahead and the next barspot shenanigans.