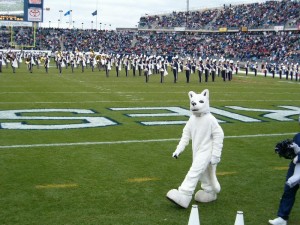 Jonathan the Husky first showed up in 1934 in puppy form and is named after Jonathan Trumbull, the Governor of Connecticut during the Revolutionary War.  The first Jonathan came in the brown and white variety and all the Huskies afterward were completely white.  Another noted feature of Jonathan enjoying a brown eye and a blue eye.  Kinda creepy but it works.  The Husky is pretty standard fair with a cape like cover for those cold days. 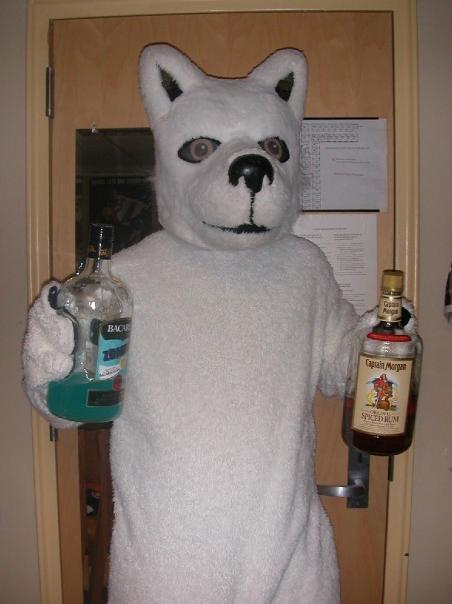 The costumed version of the Jonathan the Husky bears a similar resemblance.  When he showed up, we really don’t know when but we assume it was sometime around the seventies.  Again we note how average looking Jonathan looks.  The costume is full on white fur all around, instead of a head only variety.  There may be a uniform for the basketball games, but most of time it’s just whiteness and a pretty blank looking stare.  Jonathan doesn’t evoke fear or a playful nature, except maybe when he’s pouring shots. 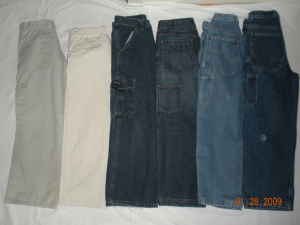 So when reviewing Jonathan, the closest relevance we have with him and the Huskies are Husky pants.  When the Purple Yeti was a tiny lil squatch, his mother would take him to department store in the middle of July to get new school clothes.  Except the Yeti didn’t hang out with the other kids when getting slacks.  His mother took him to the special aisle.  Yes, the Husky pants aisle.  This was worn with a badge of pride, until the Yeti realized it was not average kid pants, but fat kid pants.

And so much like Husky pants, that’s where Jonathan fits in.  He’s got all the ingredients of a great mascot: furry costume, live counterparty, and some garb.  Then one day we wake up to realize that he’s the fat kid that everyone makes fun of.  No exciting features, no zing, and the live Husky just kinda sits there and nibbles dog biscuits.  A makeover is what this guy could use.  A veritable diet of paegentry proportions.  Hopefully they’ll listen and put this guy on an Atkins like mascot plan.