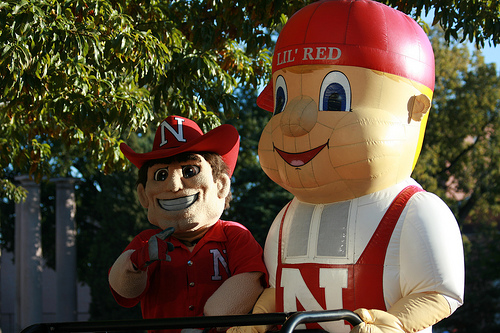 The whole family’s here this week as we dive deep into the rich lineage of the Nebraska Cornhusker’s mascots. From the various large headed and skinny legged characters to the current duo, we can see that in the state where college football is a professional and state wide spectacle, the spirit that drives the spectacle shows up in the form of some tacky looking mascots.  There is some redemption involved toward the end of this ride, but we still ask, “Do they allow art in Nebraska?”   Let’s take a long hard look at Herbie Husker and Lil Red.

The Corn Cobs mens spirit group kicked off their first appearance at Nebraska in 1942.  To help with the cheers, they introduced what some people call the Cornhead Guy.  This essentially was a guy with a giant, half cob for a head.  He sprinkled the sidelines over the next couple of decades.  No one really knew his name as he went under many corn-related aliases.  The jumpsuit he’s sporting looks like something Jason from the Friday the 13th horror movies series.  There’s potential multi-sequel horror franchise there somewhere.

The next attempt at a mascot came in the form of the aptly named, Husky the Husker.  This dude stands at about 9 feet tall and his head is a ginormous teeter totter waiting to bowl over.  What else would you expect from a paper mache type noggin?  Plus, what’s the deal with the arms?  Do they move with the help of wires or is there a secret hole helps the poor sap manipulate the equally humongiloid hands?  We’re glad Bob Devany axed this one quick.

When Devany took over in 1962, a new mascot showed up as well by the name of Mr. Cornhead.  Not as fear inducing as Cornhead Guy, Mr. Cornhead sports a full on corn body complete with arms and a big smiley face.   Also, if you spilled water on it, multiple version of Mr. Cornhead would trot about the sidelines.   If the sun was out on a blazing August day and they still had water one them, did they pop into a beefed up Mr. Popcornhead?  Sounds pretty tasty to us. 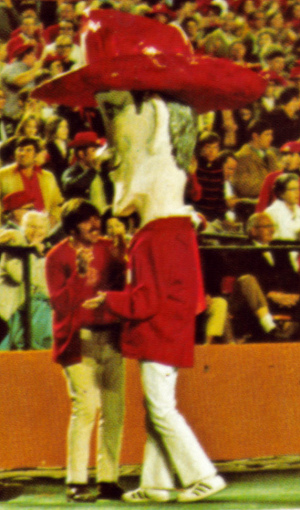 Championing the lack of originality, we see the last major iteration of mascots for Nebraska before the current dynamic duo standing tall as Harry Husker.  So instead of a hopping and popping corn guy, we get the fierce looking big N and red wearing insurance salesman out enjoying the game guy.  He started out as a character drawn by Bill Goggins but ended up on the field in the early 1970’s with yet again another top heavy noggin.  It’s a good thing they were good at football back then because their mascots were weak.   The only fear coming from this guy is the fear of being nagged about life insurance.  Too bad Cornhead Guy was gone by then otherwise he would’ve lobbed his big skull right off.

Never fear, however, as the current and longest running mascot Herbie Husker came to the rescue and booted Harry right off the field.  Harry’s a little more traditional in terms of mascotdom.  He’s got the big head, but it’s fuzzy and all shiny and plasticy looking.  Various iterations of Herbie himself show that it’s all about rolling up the sleeves and getting to work.  The current Herbie has a button red shirt, work jeans, and work boots.  This guy means business.  That business won him the Capital One Mascot of the Year in 2005. 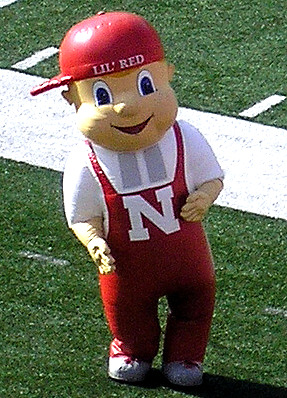 To help with the family friendly atmostphere, a spawned off version of Herbie popped out in 1993 and they called him Lil Red.  This not so little guy is half mascot and half inflatible balloon.  He’s won awards too.  He will forever be immortalized in the Mascot Hall of Fame when he was inducted in 2007.  Lil Red also won the NCAA National Mascot Competition in 1999.  Using traditional dance and some innovative moves because of the inflation helped Lil Red earn the distinctions.

Nowadays the two still rule to corn fields on Nebraska.  Herbie Husker and Lil Red show off the best of what Nebraska has to offer in creativity.  It only took them over 30 years and many tries to get it right.  There are bigger families of mascots out there, but these two pull load when the football stadium becomes the largest city in Nebraska every Saturday in the fall.  By all mean they are not the best, but for the quiet Midwest region they’ll do.  There’s nothing else pretty to look at.