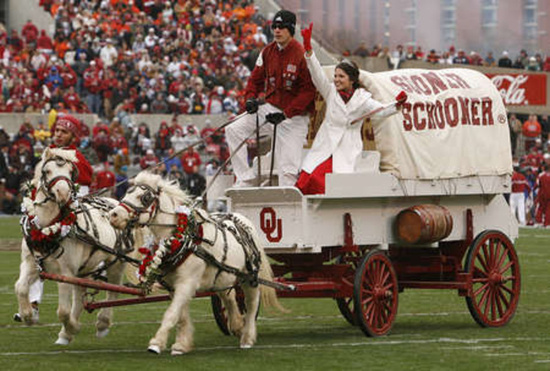 The first mascot to roll through the hallways of Norman, Oklahoma was Mex the Dog.  The mutton pup left abandoned became the head dog in 1915 when the Army folk that adopted him brought him back to their hometown.  Mex hung around until 1928 when he died of doggy old age.  In between Mex and the Schooner, there were unofficial reports of an Indian character named Little Red that first showed up in 1940s.  The school president at the time banished Lil Red in 1970.   The help of the introduction of the Sooner Schooner in 1964 didn’t help either.  The mascot delegation wasn’t official until 1980. 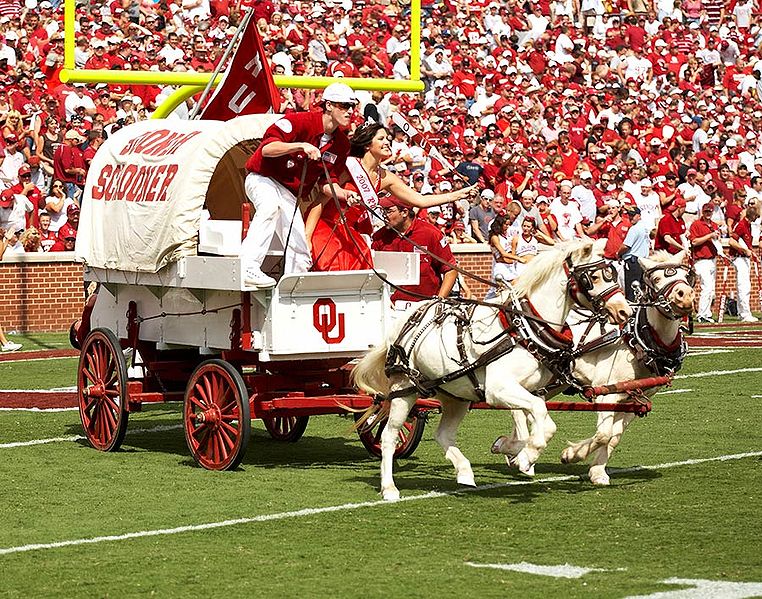 The Schooner is actually a shrunken down version of the Canestoga.  The tiny-big wagon is pulled by two ponies name Boomer and Sooner, yeah like the fight song.  The dudes that take care of the Schooner are the RUF/NEKS, an all-male spirit squad.  Now they usually have a RUF/NEK queen along for the ride to help raise spirits as well.  Chances are you’ll be seeing this group of folks alot this year.  All while hearing that song play.  Over and over.

That’s the one thing that isn’t so appealing about the entire getup.  I do enjoy the unique nature of the whole Schooner.  Usually you get furry animals and off target man/beasts, but with this it’s a big ole carriage that comes a barrelin’ down the road.  The whole pageantry of the Sooner Schooner is great.  The fight song that’s heard with is what stabs into the ears.  It’s the only song that’s heard playing from the Oklahoma band,  do they know any other songs? 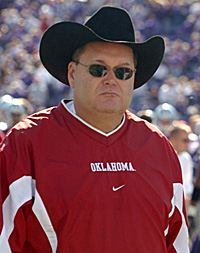 Okay, so this is a mascot post and yes the Schooner is pretty cool.  It would be fun one day to take a ride.   But they need to axe the fight song.  Good Ole J.R.  from the wrasslin’ empire of the WWE is the only guy that likes this song, seriously.  Even when you take a look at the lyrics, the head hurts.  Not much originality there.  For all of the bells on whistles involved with the Sooner Schooner, they should be able to figure out something better than repeating ‘Boomer’ and ‘Sooner’ 6 or 7 times in a row.  Please, please, please fix the song.

The Oklahoma Sooners are in line for another title shot this year.  They have a returning quarterback who’s an instant NFL prospect, they really have the rest of their team back, and they will have a legendary mascot in the Sooner Schooner leading the way.  If but for not one major blemish in the fight song, this team earns the right to got all the way.  Please somebody put on some Vanilla Ice fast.