It was a different day Saturday afternoon.  The cold spilled in over the midwest, the clouds filled the sky, and we were actually making the set of night games for the barspot.  We huddled ourselves in the late afternoon/evening around the big bar in the sports bar section of Nick and Jake’s.  Sports bar section you say?  Yup, that’s different too.  Nick and Jake’s really isn’t a sports bar.  But yet, it is.  Bar or not, the games on the television screens kept us nice and cozy. 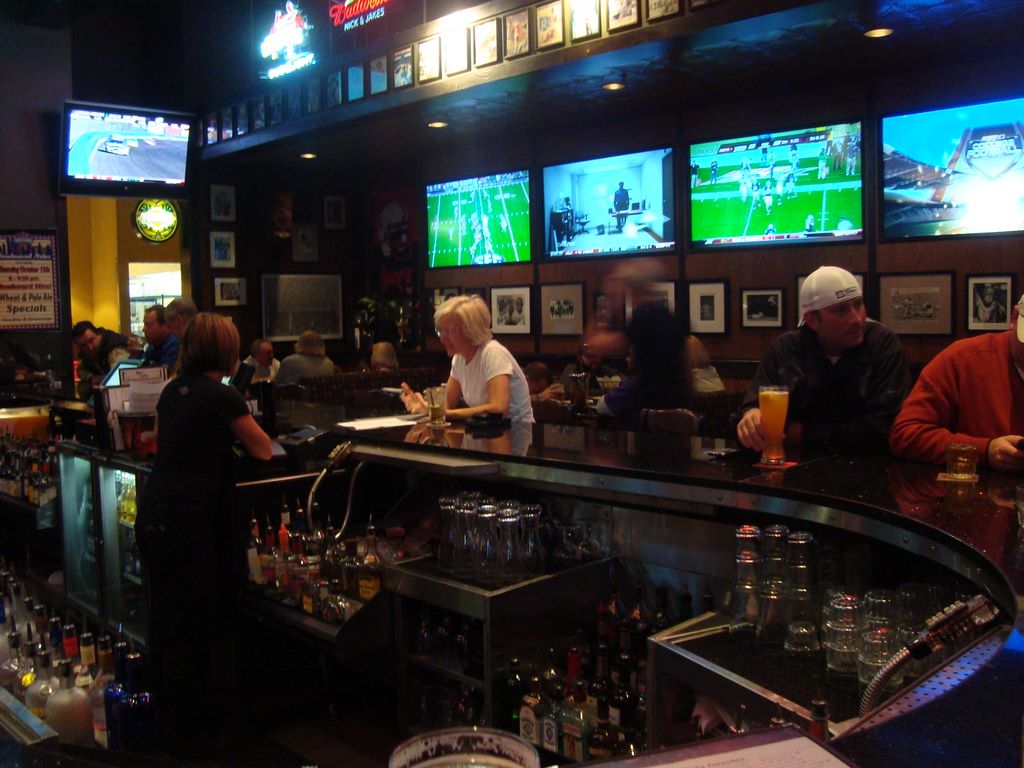 Nick and Jake’s plots itself square in the heart of south Overland Park.  In all seriousness, we had a hard trying to find some sports bars down there.  Google told us Nick and Jake’s was it so we when we headed that way, we really didn’t expect much.  To our surprise, the first thing we saw was a restaurant host.  Okay.  We spotted the televisions to the left and made our past they guy, avoiding his seating requests.  The story of Nick and Jake’s goes that two dudes grew up next to each other  but were really different.  They decided to open a joint but have both their tastes catered too.

So when evaluating the sports bar part we first had to ignore the restaurant  side.  Half the review toasted just like that.  The bar side did the best it can with the space it had.  Sitting down at the head of the bar we couldn’t help but notice the multitude of big screen televisions.  Especially against the side of the wall.  There were regular screens in the booths and some smaller flat screens to frame the big screens.  Sports memorabilia filled the extra space around the screens.   There were no games, though, which disappointed us.

The service wasn’t as disappointed.  Ricky was our server and she saddled the whole bar including us, slinging drinks and orders left and right.  She really wasn’t the best looking waitress but she did keep us happy and even got the right dude to change channels for us.  She even had to put up with some rowdy dudes sitting next to us on the bar.   We’re pretty sure she knew the guys, but their presence kinda harshed our buzz a bit.  Apparently they were avoiding one of the fellows wife’s party for the evening and went on talking about golf club sizes.  Yeah things lit up when they left. 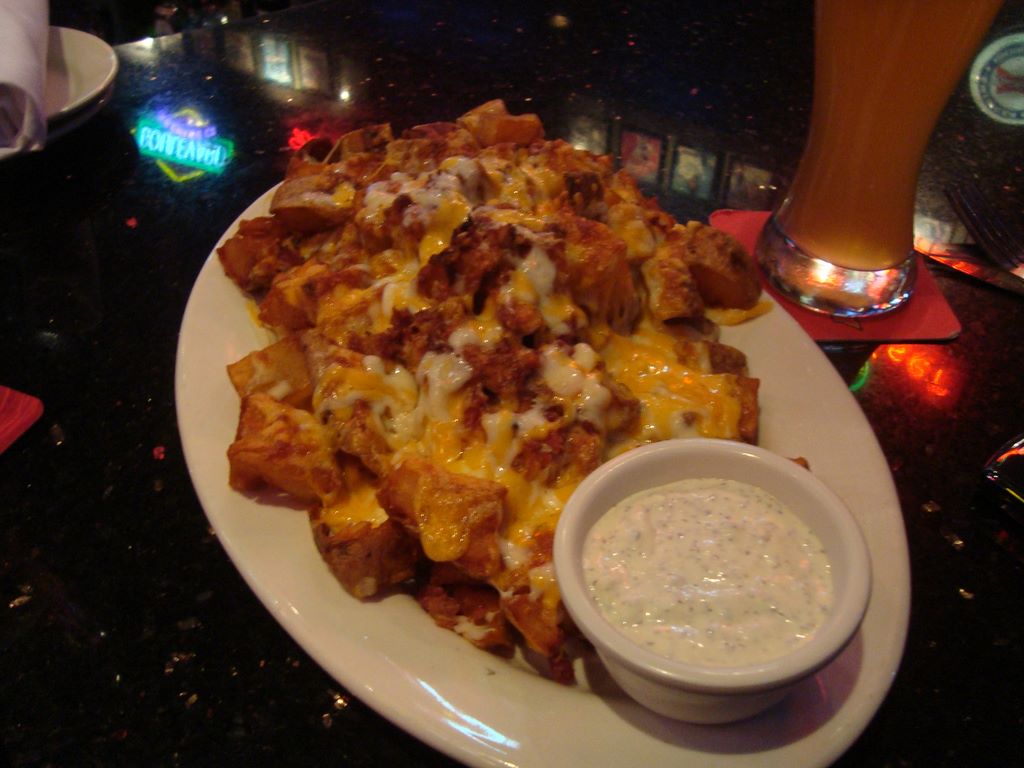 What lit up our tummy was the food.  We asked Ricky what was the best Starter or Bar Munchie on the menu.  Yes, they split the menu up for each taste as well.  So when she said Irish Nachos, we were like okay.  When it came out we knew it was a good call.  The bacon matched well with the super crispy potatoes.  The cheese held everything together.  But what really put it over the top was the peppered rand dressing.  Seriously,  if they had it bottled I would’ve bought two or three.  It was the best ranch dressing I had and called out for another side of it to help wrap up the taters  Too bad the drink specials were weak but it didn’t matter while we washed down the grub.

We washed with food and we rinsed with the college football.  We already heard about some tight games in the afternoon and were anxious to catch up on the action for day and the evening.  We heard about Alabama rolling Mississippi, but Florida taking on LSU was the monster match up we spied Jake’s for.  The game turned out to be snooze city.  We caught the last second kick that Pitt had on Uconn to win the game.  The game of the night by far was Michigan heading to Iowa.  Tate Forcier sat on the sidelines when Denard Robinson tossed a dumb interception at the last second to lose to Iowa.  Iowa’s defense was tough and it forced Rich Rodriguez to trot out Robinson, a running quarterback, to switch things up.  It worked for awhile but RichRod left the Robinson in too long. 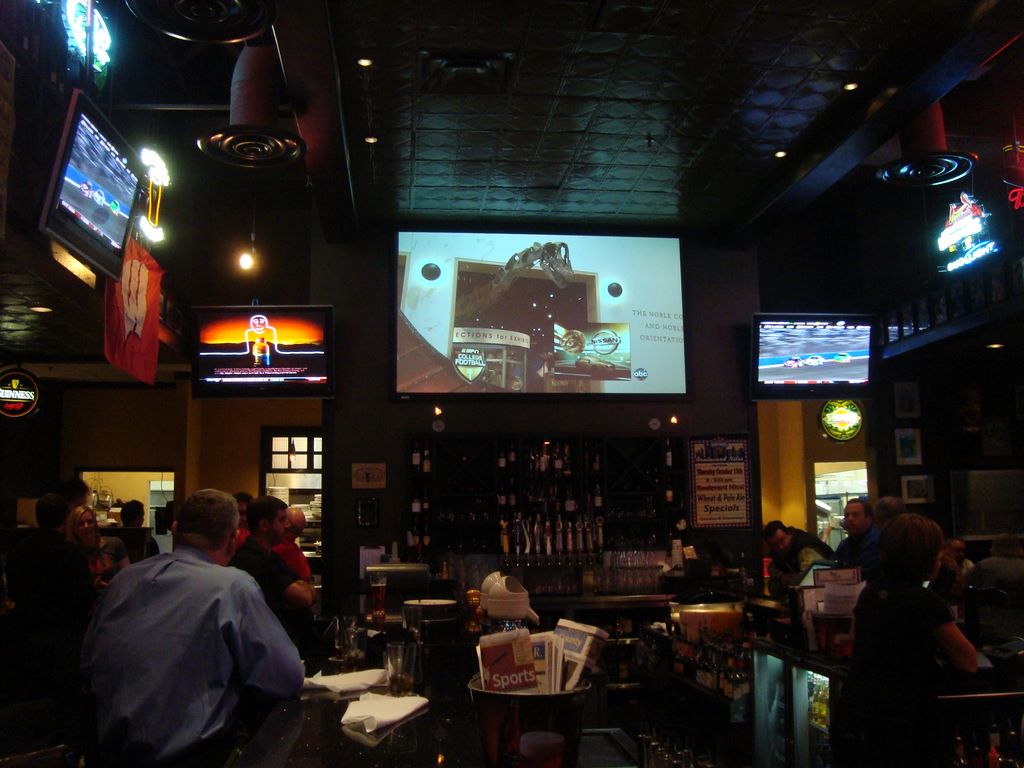 The Big 12 had sweet competition earlier in the day when both Iowa State and Texas A&M were thinking upset but Kansas and Oklahoma State held them off, respectively.  When we got to Nick and Jake’s Baylor had Oklahoma tied up after 1 quarter, but while we finished the Irish Nachos, the Sooners rolled over the Bears 33 – 7.  Texas had some early trip ups as a pick six led Colorado to a lead that they held onto through halftime.   But Cody Hawkins, the coach’s kid, proved his worth by tossing a pick six back for Texas and helped them wake up to a 38-14.  The other game for the evening, the one most of the bar peeps were there for, featured Bill Snyder 2.0 and his Kansas State Wildcats taking on the Texas Tech Red Raiders and pirate Mike Leech.  It was a blow out and stinker of a game.  Kansas State had no chance form the beginning and reality hit both teams very hard.  Kansas State 14, Texas Tech 66.

Nick and Jake’s for what it’s worth really was half of a sports bar.  There were no games and the audio had music on half the time.  We felt that most of the people were having a drink and waiting to get a table.  For the people there to watch football, the television setup was sufficient.  The food was tasty but both it and the drinks were pricey.  If you get there early enough, you can find a seat but otherwise you are toast.  Speaking of toast, the games were mostly burnt but the Iowa and Michigan buttered us up nicely.  If you’re out down south of town and looking for sports check Nick and Jake’s out.  That is, if you can’t find a full sports bar first.