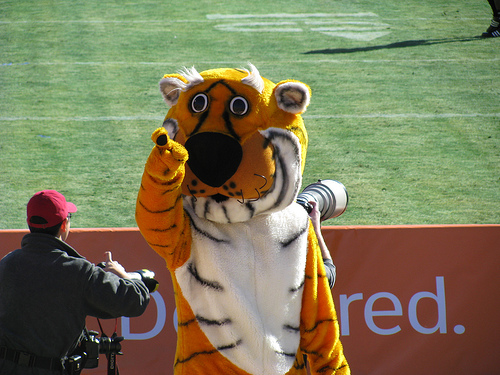 Welp, we did Willie the Wildcat to kick off last year, Big Jay and Baby Jay toward the end of last season, and now we have the last of the big Kansas City area school mascots in Truman the Tiger.  Recently named after a famed president, not Taft, and hailing from the University of Missouri, Truman’s past comes from a long line of feral felines.  Today we’ll find out what makes the furry guy tick and also offer some improvements to his already super sized personna.  So kick back, relax, and come with us on our second year of Mascot Monday with Truman the Tiger.

While in the throes of the American Civil War, the University of Missouri’s curators decided to shut down for the duration of the war.  While everything was quiet on the Columbian front, the local residents decided to take guard and protect the homeland.  They ended up being called the “Fighting Tigers of Columbia,”  because of their fierce actions toward and enemy combatants.  Welp, after the war ended and the university instituted a football team, they decided to name the the squad the Tigers, out of respect for the soldiers of old.

To start, the University of Missouri had two mascot tigers.  One was male and one was female.  They didn’t have any real names or other distinguishing identity.  It wasn’t until 1984  when Truman the Tiger was born,  all due to student naming contest.  So from then on, Truman hunts the sidelines.  Whether he tailwhips students, rocks the push ups with the ROTC crew, or leads on cheers, this frisky feline roars with spirit that Columbian Jungle hears every Saturday. 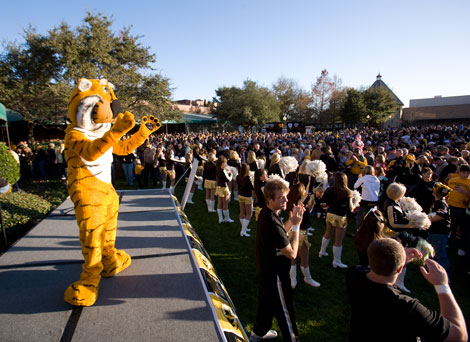 Now, let’s take a look at this guy.  Truman comes to us in a full, fuzzy outfit.  Decked out from head to paws, Truman wears the traditional gold with black stripes, much like a Bengal tiger would.  The head is enlarged and sports a massive grin.  Truman’s  tail, however, looks just a lil too old.  Frankly, while this mascot ranks amongst the highest in fun and class, Truman could use and update.  The black is worn through and the whiskers look droopy.  He carries the rough and tumble spirit, but his costume could use the wash and tumble treatment.

Most costumed mascots have a rigorous uniform treatment.  They must do this to make sure the whites are whites and the colors pop.  When cheering on your school, you need to shine.  Truman doesn’t shine.  He could be one of the top fun-style mascots in the nation but he makes us feel dirty while watching.  That, in turn, makes us wonder if he’s really into the whole mascot thing.  We’re pretty sure he’s all about the Mizzou, but come on Truman, clean up! 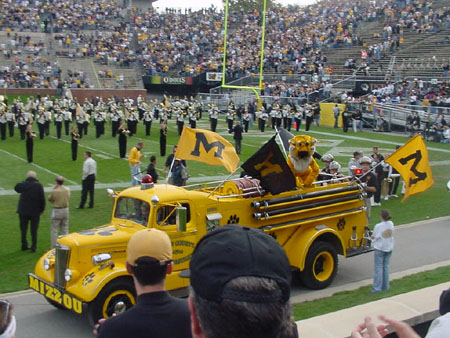 So the grandiose history of the Missouri Tigers speaks to the brazen home town crowd.  A tiger was an apt description for the type of competitors that hail from the middle of the state.  The tradition is strong within Truman, even though his name didn’t come until the 1980’s.  The Twenty Tens are here and now it’s time to upgrade.  Here’s to you, Truman the Tiger, and if we had some extra soap we would toast you with that as well.