We’re gearing up for a road trip this week.  If you are down in the Austin, Texas area for SXSW for the next 2 weeks, be sure to drop us a line.  The contrast between the home of the Texas Longhorns and the leader Big 12 South versus Kansas City and the epicenter of the Big 12 North should give us plenty of fodder to chew on for the next couple of weeks.  We’re taking no breaks, however, and this week’s Mascot Monday also gives us a good contrast between a good mascot and a bad one.  Now, we’ve seen some non-plussed mascots before but we think YoUDee from the University of Delaware takes the cake.  So come with us on the journey to find out about this blue hen. 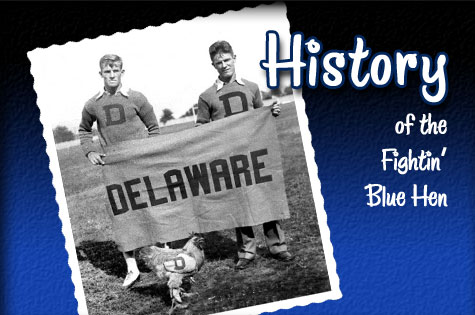 As for the history of Delaware football, we couldn’t really find much.  Apparently the Fightin’ Blue Hens were around in 1800s and they landed on the college football map around the 1940’s.  They won a national title in 1946 in Division II, a couple of titles in the 70s, and most recently in 2003.  They are considered one of the big daddys in FCS football right now.  The name of Blue Hens is the same name of the state animal for Delware.  We didn’t even know hens could be blue.

Captain Jonathan Caldwell knew thay hens could be blue.  Way back in the revolutionary war, his company toted around these tots to use in cock fights to pass the time between battles.  Eventually, the soldiers’ bravery and valor led them to be associated with their blue hued counterparts.  That fighting spirit carried down to the university athletics department.  The university claims that YoUDee’s great-great-great-grandfather won a Gold Medal of Valor as a matter of fact.  They do not claim how the mascot ended up being named YoUDee. 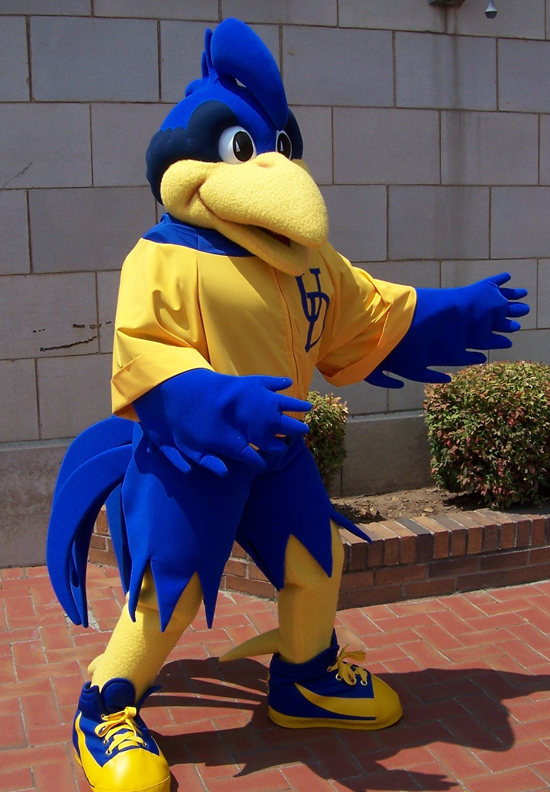 So let’s take  a look a YoUDee.  YoUDee is a hen, not a cock.  The blue plummage cleary shows that she is also a blue hen.  So the school got that right.  The gold frames the blue nicely but doesn’t exactly pop out and grab us.  The shirt is bland and the shoes look like the ones 1st graders get before they upgrade to the shoes that have zippers on the side.  All in all, YoUDee is the most average of average mascots.  So why did the Mascot Hall of Fame induct YoUDee?

That’s right, the Mascot Hall of Fame, placed YoUDee on the same level as Big Red, Bucky Badger, and KC Wolf.  Okay, we’re curious about the KC Wolf too.   But right now our ire is toward YoUDee.  We’re sure YoUDee does some exciting routines and such, but what we’ve found so far is nothing.  Was it a pitty entry?  Did they feel sorry for the unsalted mascot?   We think so.

That said, we offer some improvements to this little blue critter in hopes of making YoUDee much more spicy.  First off, lose the shirt.  It’s too loose and not threatening.  Grab some pads and hit the gym.  Second off, get some football cleats to match the pads.  A full on Fighthin’ Blue Hen will come through then.  We’re okay with the smiley cartoony grimace as that can be appealing and will be even more when YoUDee sports the pads.  A simple costume change and workout regimine will fix her up. 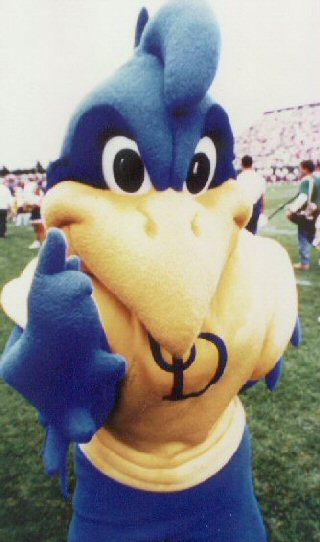 We here at the KCCGD believe in equality amongst genders and think that this can break the boundry in terms of females playing football.  Sure, mascots on the sideline have little affect, but seing YoUDee breaking tackles might break the paradigm.  If anything, it will give us a little more cheer for instead of fighting of the yawns when checking out the paltry poultry mascot.  In the meantime, help a chicken out and get a YoUDee gram while you can.