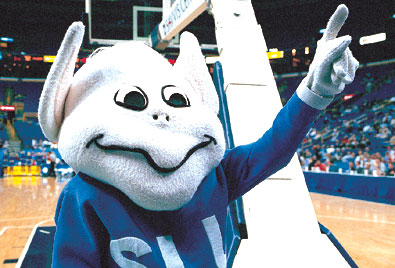 This Easter weekend, I couldn’t help but think about hte big ole Easter Bunny and all of the good chocolate candies he brings to the girls and boys.  Then I thought, man what a lucky bunny.  If a funny thing, everything rabbit related can be described as being lucky, especially its foot.  Believe it or not, this week’s mascot also can from a symbol of luck.  Luck in college football usually describes the losing team’s excuse.  The St. Louis Billiken represents the culmination of the craze and need for luck in the athletic teams for a university.  Sit tight, there’s no lucky charms here to get after. 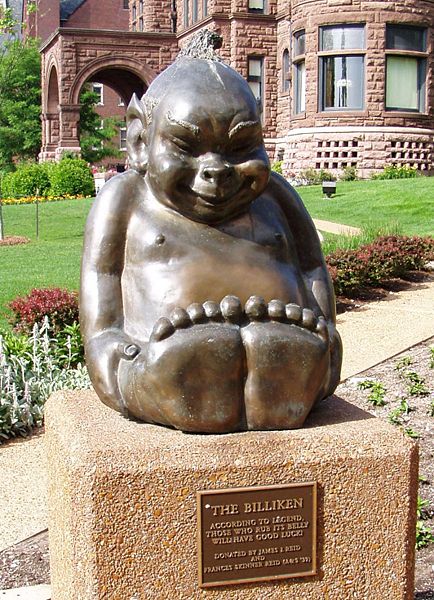 St. Louis University is the oldest university west of the Mississippi, founded in 1818.  The Catholic University didn’t see it’s mascot show up until 1912.  The actual billiken came from the mind of Florence Pretz right here in Kansas City in 1908.  Pretz needed an image for a jovial and luck-giving creature.  The little fella became so popular that local beat writer William O’Connor labelled then coach and student John Bender a Billiken.  Now whether it came from a store owner O’Connor overheard or from O’Connor himself is another story. 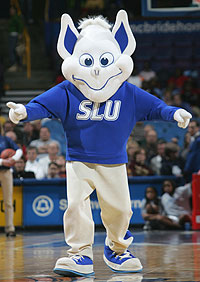 So let’s take a look at this guy.  First off, check out his goofy grin.  Yeah, he’s up to no good.  He’s also up to white fur.  The tyke sports the whiteness fur-wise and blueness for his jersey.  The pointy ears and gremlin like face match that of Pretz’s creation.  Oh,and the sneakers the Billiken hoofs around in are a nice touch.  But there’s something about this guy.  Something that seems so very familiar.  What could it be?  Oh yeah, that’s right: 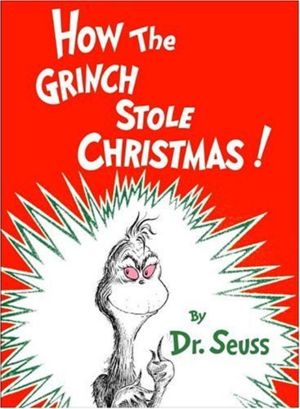 It’s the Grinch!  Grab the Billiken by the ears, take out a pair of scissors, then cut those listening holes off and you have yourself a full fledged Grinch.  Granted, the Grinch is green and the Billiken is blue, but after further inspection it seems the Dr. Suess himself may have ripped off this concept.  You see, the Grinch saw life around 1957, long after the Billiken’s appearance.  Whereas the Billiken brings luck, the Grinch brings fear and terror.  At the very least, I can see where the good the doctor got his inspiration.

So what improvements could I make?  Well, first off the Billiken can lose the uniform.  Get this little creature some pads, some shorts, or some kind of uniform related to the sport on the court (or field).  Next up, actually get the Grinch out there as a partner in crime.  Think of it.  The Grinch comes out and rains on everyone’s parade before the game.  The Billiken would then pop out and kick the naughty Grinch square in the Suess.  Not only would that get the crowd going, but it also furthers the notion that the Billiken brings good luck. 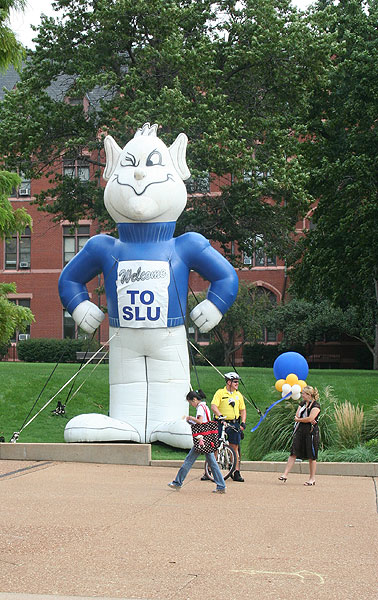 The Billiken came from the mind of an art teacher and ended up in the athletic halls of a Catholic university.  Along the way he rand into fads and an offset comepeting creature.  I like this guy.  Anytime a university has a mascot that is tied to no known actual creature or thing, I can get into it.  It shows off the creativity needed in mascotdom to stand out from the crowd.  Yeah, there’s tigers, wildcats, and eagles.  There’s only one Billiken.