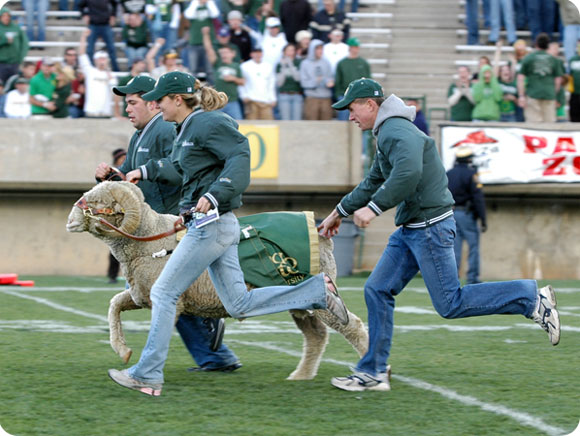 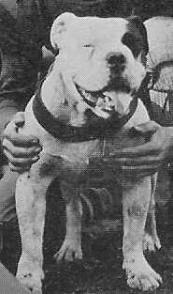 Everyone today knows that Colorado State is known as the Rams.  Well, back in the day, they had the other distinction of being the Aggies, like many other colleges.  The Colorado Aggies never had an official mascot.  Around 1912, a student named Floyd Cross brought a bulldog on campus to attend the athletic events.  The named Peanuts would roam around until 1918 when he was found dead due to an apparent poisoning by some Colorado students.  In 1919, the coach’s son Billy Hughes served as the mascot to help mend the loss.  Yes, an actual human was the mascot.  A bear cub found its way into pictures that same year but nobody knows where it came from and where it went. After another stint of bulldog duty in 1936, the student body decided it was time for a change. 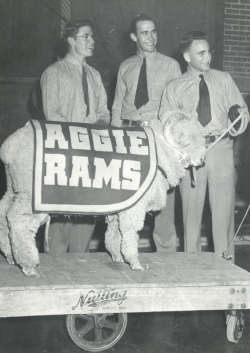 The students voted to go with the name of “Aggie Rams” as the official team name in 1946.  With that, came the need for a new mascot.  On January 11, 1946 the Lancers pep club showed up at halftime of a basketball game with a live domestic ram named Buck.  Student William Simpson won $5 and the honor of being the one who came up with the name ‘Cam the Ram.’  The four legged Cam is on it’s 22nd live animal.  The history is rich on the live mascot, but we really didn’t see anything for the fluffy, cartoony one.  So let’s take a look at how he fits with the ilk. 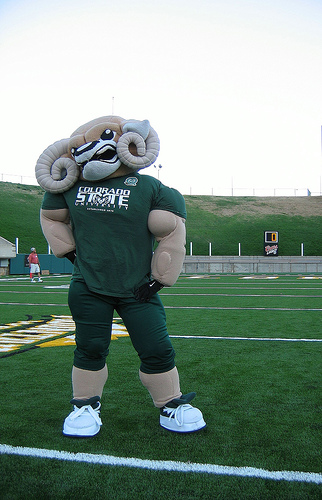 So somebody smashed his face in.  That’s all we can see with this guy.  The feet are nice and huge but the hands are more human like.  We dig the massive muscles on the mascot as well as the appropriate gear for the football field.  We just can’t get past the noggin’.  It looks like a ram’s head, but it’s just so wide and mooshed looking.  Most pictures of rams display a much thinner face and more prominent horns.  We’d like to see this changed on Cam the Ram real fast.  The large, twisting horns would put him in a unique class of mascotdom.

Hopefully one day they will change it.  But until then, we still dig the dynamic duo of Cam the Ram as the live animal and Cam the Ram as the human fuzz friend.  Even though he’s got some massive rivals in both school and mascots in the state, the live Cam the Ram can butt heads with just about any of them.  The live feller needs some sprucin’ but besides that, we’re sure he can bench about 350 maybe 375.  All in all, a great job.  Now it’s time to rock some Ram Jam.