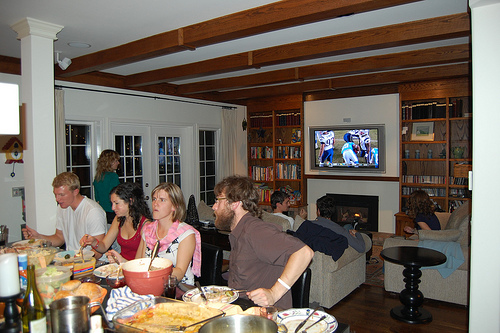 You know, when I started this blog, it was all about going out.  My main reason was to watch college football at its maximum potential.  I couldn’t afford a rig so a bar was the next best thing.  I’ve watched some football before at home but this time I’m going all out.  The games are spread out perfectly, not unlike a Thanksgiving dinner, this weekend so I figured what better way to graze on the games while I graze on leftovers by staying home and watching it from KCCGD Headquarters.  Happy Thanksgiving to everyone out there and I hope you have as much fun watching the great action as I do.

When: Thanksgiving Weekend 2010
Time:  All of the time, baby!
Where: Your home and mine
Games:

Notes:  Whoah Nelly!  Look at the games you have to feast on!  It’s pretty much all rivalry all weekend, with a  couple of national title contender type games for desert.  This is going to be a marathon.  Thursday starts us off with an old school rivalry that sees one team going for bowl eligibility and another going for a shot at the Big 12 South.  Texas for the former and Texas A&M for the latter.  Crazy, we all thought it would be the other way around at the beginning of the year.  But that just gets us started.

Friday we get a few games but they are some big ones.  Sure, there’s the Backyard Brawl to start us off, but with the Iron Bowl and Colorado taking on Nebraska next, we barely have enough time to strap in.  It’s probably the biggest Iron Bowl ever.  Meanwhile, Colorado looks to be spoiler and gain bowl eligibility.  They have a shot, too.  Later on in the night sees Oregon getting a test from ranked Arizona and Boise State going to a red hot Nevada.  National title implications all over.

Saturday we go all rivalry and tradition.  The Game sees and early start, with the Border War closely following behind.  Missouri may be playing for the Big 12 North title by the time kickoff comes around.  Kansas will be playing the part of spoiler there, too.  After such great rivalries as The Holy War and Floyd of Rosedale, we get the Bedlam Series.  Oklahoma State is hosting Oklahoma and it’s for all of the marbles in the Big 12 South.  Mix that in with a little Notre Dame vs USC and we have ourselves one of best college football weekends ever.  Enjoy!