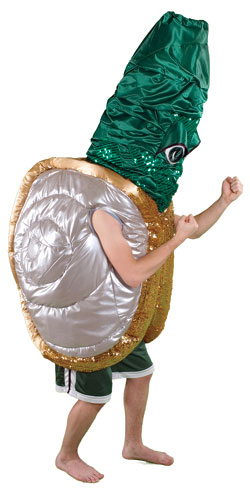 So yesterday I was hanging out at the pool and was stuck trying to figure out just who should I profile for this week’s Mascot Monday. I figured, “Well, hey, I’m at the pool. I might as well do a mascot that’s water based.” You know what? There’s hardly a college mascot out there that is water based. Sure, pro sports has plenty of Sharks, Dolphins, and Devil Rays but at the college ranks, there’s hardly a mollusk. So for this week, I will talk about the only mollusk mascot and one of the only water based mascots in college, Evergreen State’s Speedy Geoduck.

Evergreen State is a liberal arts college established in 1967. Its non-traditional roots led to the formation of a couple of athletics teams but unfortunately they have no football program. Hey, when it comes to water based mascots, you gotta reach for whatever is available. I’ve looked around all that I can for other tid bits of history for Evergreen but I just couldn’t find it. Hey, I guess that’s what you get for being a middle aged liberal arts college. So at some point, the school decided that they should be called the Geoducks. As this article explains, it’s not a duck at all but some ginormous form of mollusk. 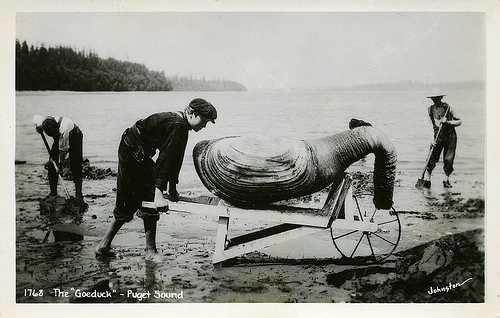 How does it stack as a mascot? Well, the Speedy Geoduck is a somewhat decent representation of the sea faring fella. So a geoduck has a shell and then the body extends out from it not unlike a snail. Speedy Geoduck is just that but with human arms and legs. Okay, so that’s gross just a little bit but when you look a the animal itself, the cards are already stacked against him. So instead of the natural mollusk color, Speedy Geoduck’s flesh is all green in school colors.

You know, I’m not going to sugar coat this. This is a rather lame choice for a mascot. I know that there is an attempt at humor and irony, Evergreen State is an alternative liberal arts college, but still it fails at achieving what it set out to do. It’s more gross than anything else. There’s other sea creatures that the school could’ve of chosen from. But of course, that would be just too bland. So we have Speedy Geoduck and he’s at the ready position to fight and cheer for his fellow classmates.

Let me give some advice to Evergreen State, and while I’m at it let me give to all colleges out there. If you are going to pick a sea or water based mascot, make it a good. If you are thinking about changing a mascot or are a new school and need a mascot, make it a sea or water based one. There are so many great choices out there. Heck , there are even some rather obvious ones. Pick a shark, pick a killer whale, pick a phirana, heck pick a large mouth bass. Pick something that can actually look intimidating and not like a mutated hot dog.