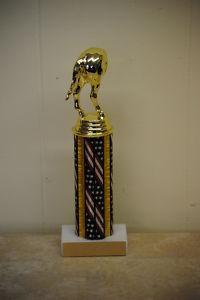 Yeah the party lasted all through the weekend and I didn’t make a single pick.  No, it wasn’t having the worst week ever, it was the fact that I never put picks in.  It could be the fact a my buddy was in town and we were too busy sightseeing.  Or it could be that I just didn’t have an internet connection.  Whatever it was, I didn’t get the picks in.  Oh well, that’s why we have 2 dropped weeks.  Will I be able to come back and compete for the league title?  Let’s looks at the standings:

Yes that’s right, I missed out on a full week of points.  It doesn’t look like anyone will be able to catch Bryce Brown for Heisman, though.  He didn’t win the week but it’s the first time in the last 4 weeks that he didn’t win it.  My big fat 0 for week placed me at 4th place, within striking distance of 2nd.  It will take this weekend to do it, however, as the last week are championship games and will more than likely be dropped.  I have faith, however.  No big surprises in the picks this week. Well, at least not as surprising as the actual games.  Tons of upsets that jacked up the BCS.

With Oklahoma State, Oklahoma, and Oregon losing over the weekend, the shakeup was large for the BCS Standings.  The absolute worst case scenario has happened.  Three SEC West teams are 1-3 in the BCS.  Now, that will shake out a bit in the next two weeks, but unless there is a miracle, we may get an SEC rematch in the BCS National Championship game.  So, let’s pray to whatever football gods to make sure that this doesn’t happen.  Big 12 wise, somehow Texas is 25 after losing again last week.  Baylor moved up big and Kansas State moved up a little.  Oklahoma State and Oklahoma are still in the Top 10 and they may be when they meet for Bedlam.  There’s still great football left.