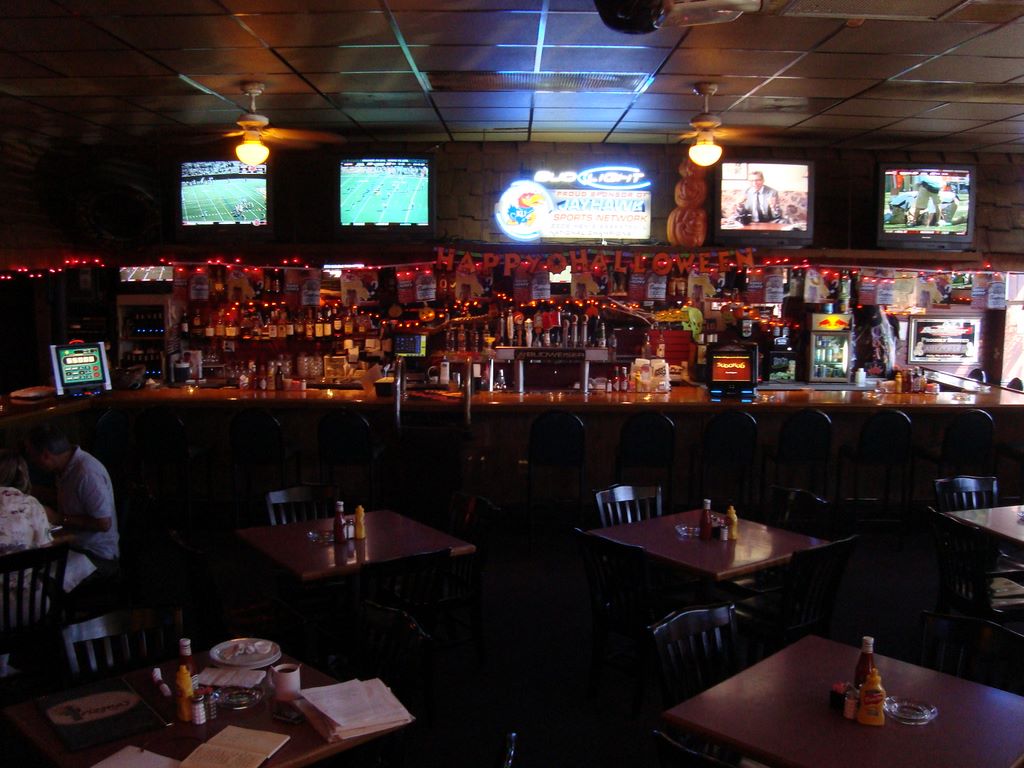 In the haze of a mid October sun, the KCCGD wagon train rolled up to the wild west of Shawnee, Kansas to watch some ball at Arizona’s Neighborhood Grille and Bar.  The rustic setting of the place provided a decent setting for the shootout that was to become.  There were some disappointments for the day, including the saloon we witnessed them in.  But we buckled down, circled the wagons, and set up post for some college football. 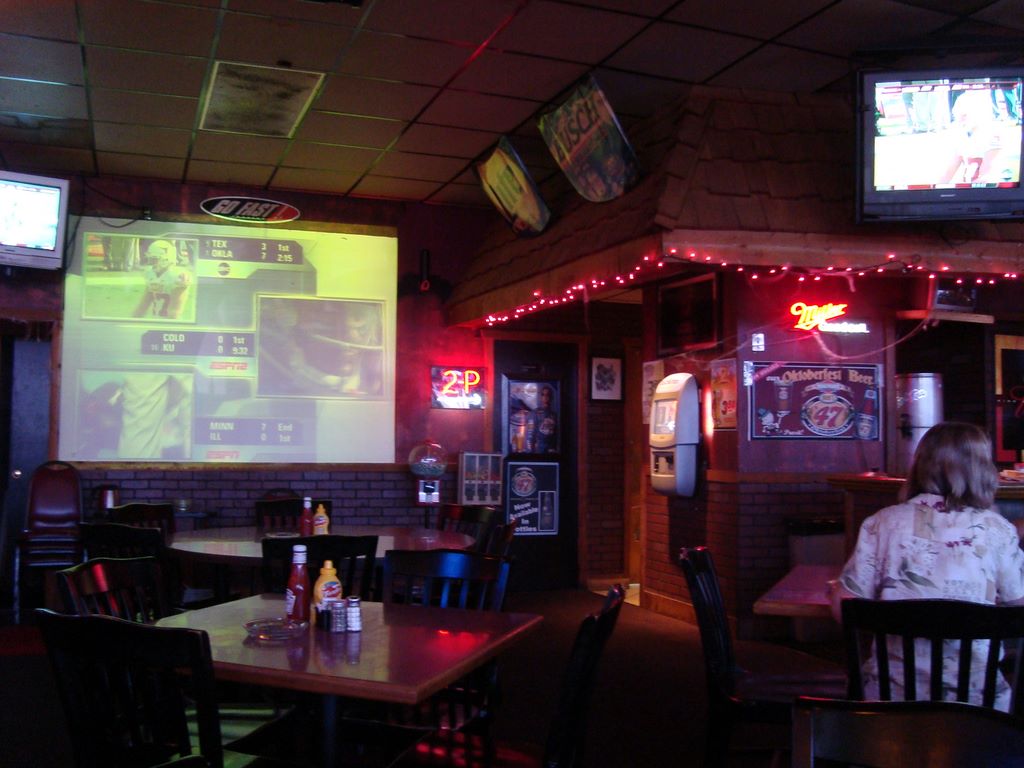 Talking about rustic, walking into Arizona’s is like a time warp.  As with just about every bar, there is a good portion of regular TVs and projector TVs.  In the corner of this establishment, a dusty pool table centered the game room while darts, Golden Tee, and Bowling framed the sides.  The sound system overheard is clear and the first song that the Yeti heard was a Journey song.  It was rockin’. 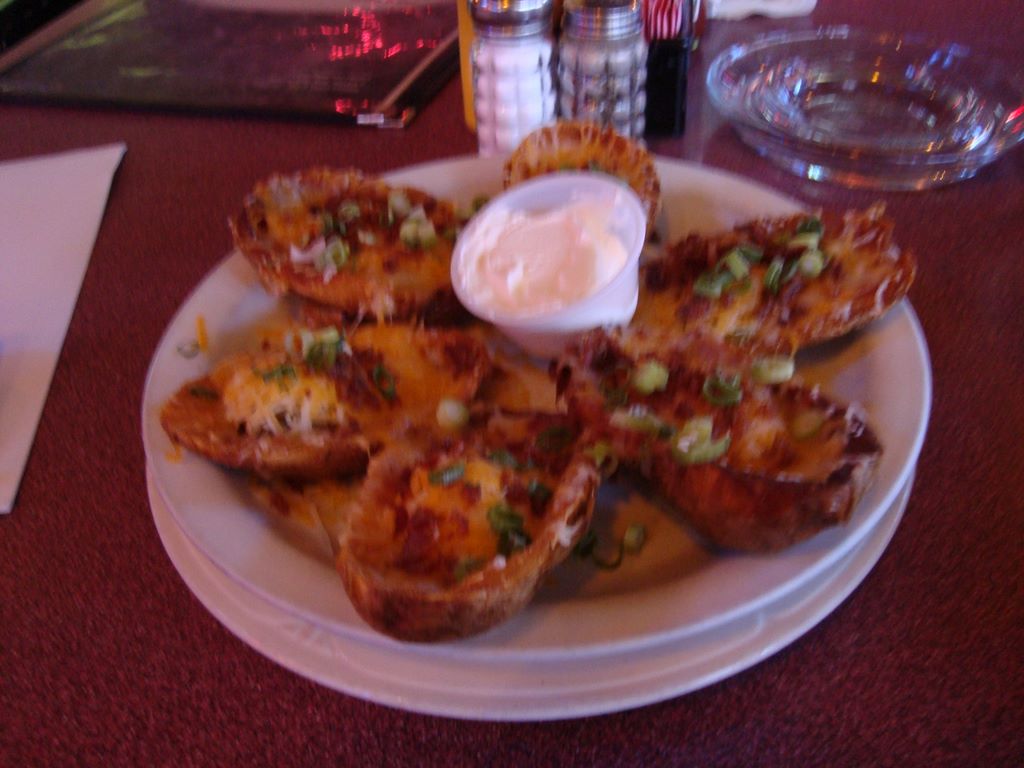 What wasn’t rockin’ is the TV setup for the bar.  The variety of TVs were there, but from that setup there were no high definition TVs!  On top of that, the Gameplan college football plan from ESPN is not there as well!  Five years ago, as what this time warp landed us, the TV setup would’ve been okay.  Today, however, it is just not acceptable.  The Tasty Taters above were about the best thing here as the service was busy passing around a cake of some sort, even though the Yeti was the only one there.

Okay, the Yeti was there for football, and at least I had some games to watch and keep my joy up.  Toledo upset Michigan ha ha.  Okay maybe we can’t say upset anymore but I’m still loving the score.  Vanderbilt went bye bye from the undefeated ranks as Mississippi State upset them (again, is it upset?).  Penn State smacked the hell out of Wisconsin and worked their way up the rankings.  I’m cheering on the upset from Michigan to Penn State next week.  There was upset and no defense from LSU as Florida rolled them big time.

The bar was upsetting and much of college football was upsetting, so how about the Big 12?  Happily K-State went to Texas A&M and walked out a victor.  KU had it close with Colorado and pulled away at the end.  Texas Tech pulled into overtime from Nebraska but pulled out the victory.  Baylor rolled Iowa State.  Missouri unfortunately was upset by Oklahoma State as it seems that the Cowboys are for real.  Never fear, Tiger fans, your redemption may be this week in your next opponent.

The game of the week for Big 12 is of course the Red River Shootout, and my what a shootout.  In a back and forth battle of classic proportions, Oklahoma and Texas displayed what some of the coaches after the game called it as, “The Greatest Game They Ever Watched.”  There were many a lead change and great plays like the catch above, but a cooler and more collected Colt McCoy lead the Longhorns to victory and a big run at the end sealed it with Texas winning 45-35.  This is why even Michael Wilbon is exclaiming that the Big 12 is best in football this year.

That great game made up for the time spent in the ole west of Arizona’s.  There is construction going on outside of the building and I suggest that they turn their focus on inward.  Even one of the projectors is broke and scrambly.  The scramble for Missouri comes this week as they now have a chance to fight back when they play now No 1 Texas.  Needless to say this train will roll on to the next hitching post for this battle while tumbleweeds will roll gently here in the wind of Shawnee.