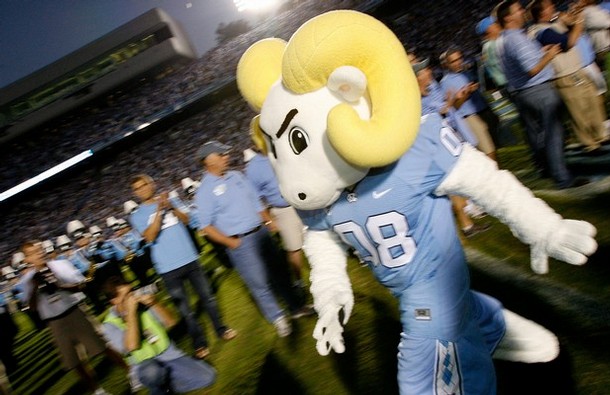 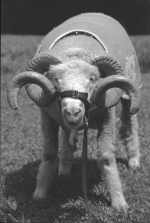 Since the way back in the beginning North Carolina has been known as the Tar Heels.  It goes way back to the Civil War days of the courage that the Carolinans faced and the smack talk they threw down to people from Virginia.  But, what does this have to do with a ram?  Nothing.  Rameses was the brainchild of a head cheerleader in 1924.  After a good luck kick to beat VMI 3-0, the mascot stayed.  The name ‘Rameses’ comes from Jack “The Battering Ram” Merritt who led the Tar Heels to a 9-1 football record two years earlier.  We’re not sure when the costumed Rameses made his debut. 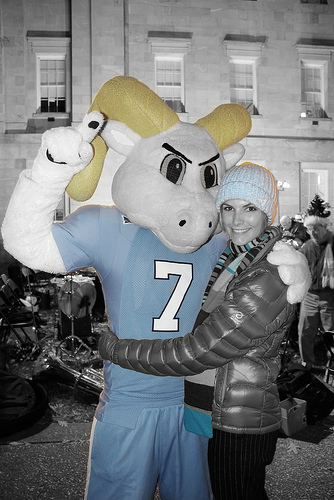 Costume wise we see another notch for the cute-style mascot.  Rameses sports and snugly fit football uniform, complete with shoulder pads.   The paws and fur are all there to make sure it’s a sweaty afternoon.  The head is massive, with big horns and a somewhat cartooney mean face.  Rameses could look a little tougher but at least they don’t go overboard on the cuteness.  They certainly don’t go overboard on use of the live mascot.  We really don’t see much of the guy. 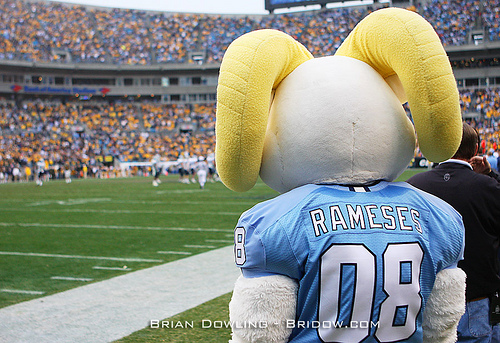 In researching about Rameses, we stumbled upon a former Rameses rep, Jason Ray, who was hit from behind on the highway and later died.  This really has nothing to do with how the duties of a mascot are performed but it does make us think about how crazy a lifestyle a mascot must project when they’re out on the job.  Now Ray was on the highway going to a convenience store and messed up.  But the mascot themselves are the modern day daredevils of the campus.  They’re supposed to be the ones that are crazy and out of control to give the school spirit a jolt in the behind.  It’s unfortunate that Jason Ray’s life ended the way it did.  But his memory will live on in future Rameses and their homages when they launch t-shirts out of a cannon. 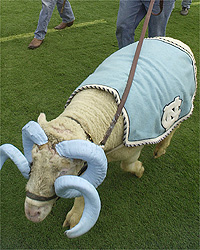 The University of North Caronlina’s Rameses has a lot of work coming up in the next week.  Believe it or not, their football team is turning the corner too.  Once people get around the who Tar Heel confusion, they can start to enjoy the lovable nature of Rameses.  What most of them won’t know is his tragic recent history.  We’ll be watching Roy Williams go for another Tar Heel championship and we’ll be watching Rameses pay tribute to the Ding Dongs Jason Ray was going for.