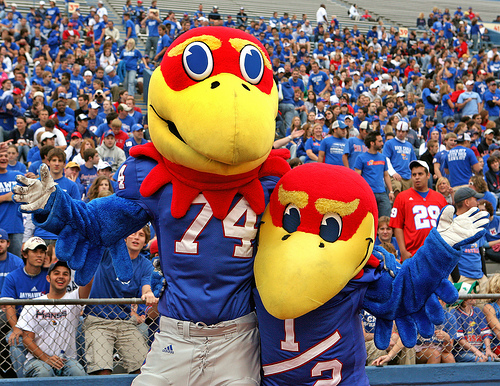 It’s the after 4th of July recovery and we’re inching ever so close to the start of the 2009 college football season.  Since we are getting close and Mascot Monday is reserved for the off season, we are going to profile the mascots of the Big 12 teams favored to win their division, starting with the Kansas Jayhawks very own Big Jay and Baby Jay, with the other Big 12 team coming next month.  A Jayhawk has no known animal classification, but stands for something that happened before the Civil War.  We’ll figure out what they were thinking way back when and lay a couple of eggs on the way.  Get ready, Kansas City, here’s Big Jay and Baby Jay.

What the heck is a Jayhawk anyway?  Welp back in the middle 1800’s, settlers around the are sprinkled the countryside.  They called themselves the ‘Jayhawkers of ’49’ because they figured the cross between a Blue Jay and a Sparrow Hawk would be a nasty combination.  The name stuck to ruffians all the way through the Civil War where it turned into a call for passionate fighters of freedom.  When the University of Kansas football team hit the field in 1890, the name Jayhawker squawked across their uniforms. 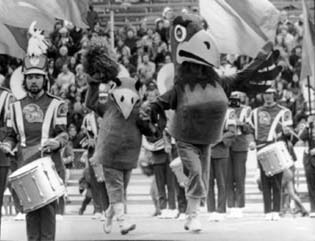 Okay, so now that we get what a Jayhawk, when did the furry concoctions show up?  For years the Jayhawk lived only in illustrated form.  It wasn’t until the 1960’s when the KU Alumni Association dropped the bank to get someone dressed up as Big Jay.  The furry bird stomped the fields alone until 1971  when, during halftime at the homecoming game against Kansas State, Baby Jay hatched before to the crowd.  The brainchild of Amy Hurst Rachman, Baby Jay helps out Big Jay and keeps the kids happy while Big Jay handles the more adult bird operations. 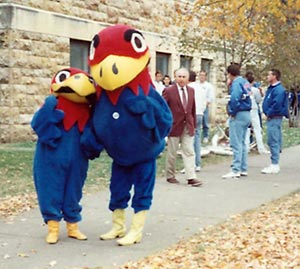 The outfits leave nothing to the imagination, really.  From the belt buckle shoes all the way up to the the beak ‘o the bird, Big Jay is a direct representation of the Jayhawk illustration.  Now for the football games, Big Jay will deck out with a a football uniform to help spruce things up.  Baby Jay looks like what would happen to Big Jay if he was left in the dryer too long.  Baby Jay hams it up better for the crowd with the 1/2 jersey and other hi-jinks.  Where as some mascots look almost completely different than their illustrated counterparts, Big Jay and Baby Jay deviate very little from the logo.

Where the mascots seem pretty manila, so does the football team this year.  Yes, there’s Todd Reesing and the explosive offense, but their defense is expected to be just a little bit better.  All in all, nothing jumps up at your from the Kansas Jayhawks.  That’s fine by them as they finished strong last year, albeit not Orange Bowl strong.  So they’re coming in quiet and will look to vie for the North title against fairly even competition. 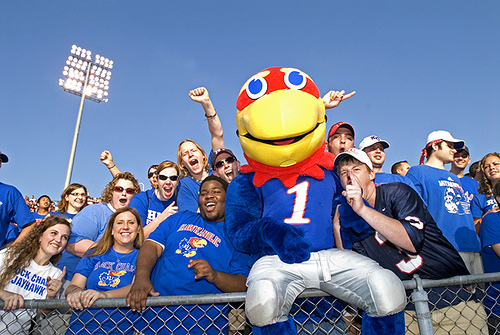 The Jayhawkers of old were rough folk who kept their nose down and the ground out their ways.  The football team looks to carry that rugged, passionate torch, all the while maintaining their plain looking existence.  Big Jay and Baby Jay are about as plain as they come and while they don’t strike fear in the hearts of others, people pay attention when they show up.  If they’re good enough for Mark Mangino to eat up, then they’re good enough for KU.