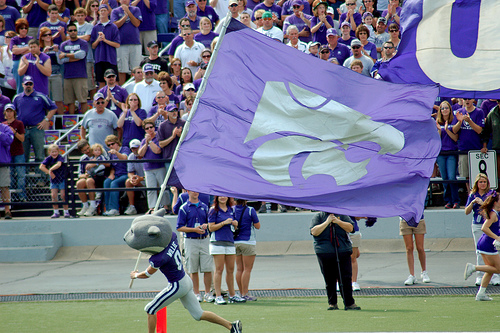 Beginning the season at home was special for the Kansas State Wildcats.  Bill Snyder 2.0 came back home and to celebrate, the school offered a homecoming party with cheap tickets.  There were questions about how the team would perform, however.  The quarterback race settled somewhat with Carson Kauffman getting the start over South Florida transfer Grant Gregory.  Meanwhile, another quarterback by the name of Daniel Thomas began his transformation to running back.  The defense beefed up 0n coaching but no one was sure how they would perform.  The only real weapon the team had coming in was quick guy Brandon Banks.  The Wildcats beat Umass that day and kicked off the year with a somewhat close win and a few more questions remaining.

Even more popped up as the Wildcats lost the next two games.  They traveled to Louisiana-Lafayette and lost the game due to poor kicking from Josh Cherry and stellar kicking from Umass.  The safety didn’t help either.  Then they went to UCLA for a big non conference game.  While watching, the one thing I did notice was how Daniel Thomas made everyone look slow on field.  Thomas looked special on the field.  Unfortunately, Carson Kauffman tossed two interceptions and UCLA’s passing poked holes in the defense.  The game was close going into the fourth quarter, but UCLA pulled away for the win. 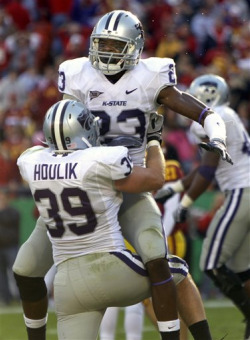 The next two games saw the Wildcats fight back with grit.  They took care of business with Tennessee Tech and Brandon Banks broke out of a slump with a 91 yard kick off return.  Then came Farmageddon.  Iowa State met up with the Wildcats and had one of the best games of the year at Arrowhead (along with the Border War).  Grant Gregory made the start and made if for good tossing 2 touchdowns including a bomb to Brandon Banks and rushing for one.  The game was close with Austen Arnuad from Iowa State matching Gregory’s touchdown passes.  It was the last one of the game that made it crazy.  Arnuad passed to Jake Williams at the end of the game to make it 23-24 and setup overtime.  But Kansas State and Emmanuel Lamur blocked the extra point and took home the victory.  This turned the season around for the Wildcats.

Or so we thought.  The Wildcats headed down to Lubbock, Texas to take on Texas Tech.  They were out of it right from kick off. Nothing worked for the Wildcats and the Red Raiders took advantage of every misstep.  It was a blowout at 66-14.  So we now knew who the Wildcats were.  Maybe not.  They came back home to Manhattan and hosted Texas A&M the next week.  Another blowout.  But this time it was Kansas State who was doing the blowing.  It was all running too. Daniel Thomas knocked out 4 touchdown runs and backup Keith Valentine knocked out 2.  I don’t think I’ve seen a bigger swing in points from one week to the next.   Craziness.

The next couple of games showed just how far Kansas State improved over the season.  They handled Colorado at home, riding on the back of now star running back Daniel Thomas.  They went to Oklahoma and lost.  But, they came back from a 19 point deficit in the third quarter to make it a 5 point game.  The Sooners ran away with it but the Wildcats made it competitive.  The next game, the Sunflower Showdown, put Kansas State in favor for the Big 12 North.  I was at the game and it was defense all around.  While the Jayhawks were busy falling apart, so much as to get the coached fired, the Wildcats locked down and beat the rival late.  Clearly the Cinderalla season was in full effect. 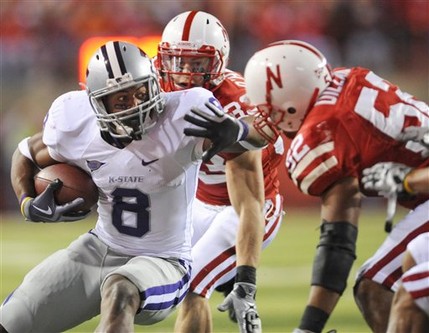 But my how quickly does the shoe fall off.  Kansas State had the North wrapped up going into their home game against the Missouri Tigers.  The Blaine Gabbert and Denario Alexendar connection put Missouri out in front.  A couple of bad turnovers and costly mistakes by the Wildcats made sure they stayed out in front.  That set up the bout for the North with the Nebraska Cornhuskers.  The black shirts were back and winning their way to a spot in the  Big 12 Championship. The game in Lincoln ended up being a sequel to the previous weeks.  The anemic offense of the Huskers proved to be just enough as the defense caused the Wildcats to turn the ball over again on key drives.  Penalty after penalty racked up to punctuate the missed opportunities for the Wildcats.  Cornhuskers won the game 17-3 and went on to give the world a show in the Big 12 Championship game.

Kansas State needed to win to be bowl eligible as well. Because of the ghost of Ron Prince, they played 2 Division II opponents and needed 7 wins to make a bowl.  It was Big 12 title or go home for the Wildcats.  They finished the season 6-6 and went home for the bowls.  Originally, I predicted 5-7 and can happily say I was wrong.  Every Kansas State fan should be happy with the season.  Defense made a come back in the Big 12 and the Wildcats helped it along.  Things are only looking up for next year.

That’s the question left.  What’s going to happen next year?  Bill Snyder 2.0 brought the magic back.  He now has more time to get blue chipper JuCo kids and recruit more talent to the Little Apple.  While Brandon Banks and Grant Gregory are out, Big 12 leading rusher Daniel Thomas will be back.  The schedule will be a little tougher next year as more North games are on the road and they get Texas and Oklahoma State.  Will they do better?  Possibly.  Will they make a bowl?  Mmmmm could be.  One thing is for sure, the Manhattan Miracle part 2 kicked off great this year and will bring even more magic next year.