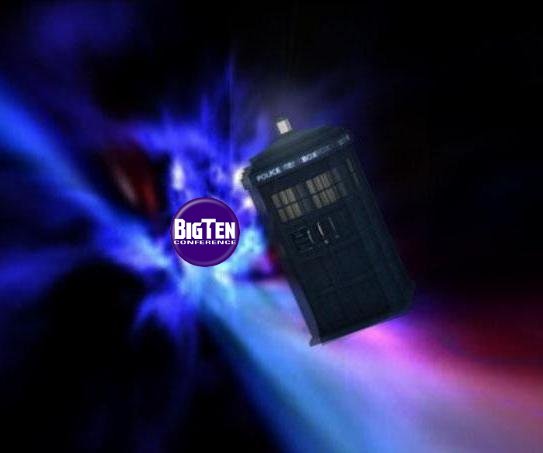 Yesterday we laid the groundwork for the expansion drama that’s girdling up the loins of college football at the moment.  Today we are taking a look at how the history of the Big 10 led us to this point.  There’s over 100 years of data to go over, but we are blowing through the earliest parts and focus on the last 20 years.  Expansion is in the blood of the Big 10 and they’ve acted on it.  They tried many times and failed but were able to pull one team in the fold.  So let’s ring up the good Doctor and fly away in the TARDIS back to the start of the Big 10.

The first reference to the conference started in 1896 when Purdue, Michigan, Wisconsin, Minnesota, Illinois, Chicago, and Northwestern formed an alliance to deal with eligibility of student athletes.  They were known as the Western Conference but changed it to the Big 9 in 1899 when Iowa and Indiana joined.  After a 9 year absence and Ohio State joining, Michigan showed back up in the conference in 1917 creating the Big 10.   Chicago dumped their affiliation and football program in 1939 but Michigan State came in to carry the load in 1949.

The 10 teams stayed the same for a long time.  One of the targets of the Big 10 throughout this period was Notre Dame.  When Notre Dame football was just getting their feet under them, they played and beat Michigan for the first time ever in 1909.  After the loss, Michigan coach Roy Fielding boycotted the Irish and threatened every other team in the conference if they played the Irish too.  Well, because of that, Notre Dame took to the road and eventually beat national powerhouses.  To this day, the Notre Dame alums claim that their forced independence directly led to their success and they point to it every time the Big 10 wants to expand or invite them in the conference.

The prodding and poking of Notre Dame and other teams stopped for about 40 years.  In 1990, the conference voted to expand again.  The lucky conference this time was Penn State.  After the Nittany Lions joined, the conference also decided to defy logic and stay as the Big 10, not the Big 11.  They modified the logo to make up for it.

It seems during the 1990’s, the Big 10 talked expansion to just about everybody.  They again resumed talks with Notre Dame and almost convinced them to join in 1999.  But besides the Irish, they talked Texas, Kansas, Missouri, and Rutgers.  Texas wanted to find a home after the Southwest Conference blew up.  They eventually landed in the newly created Big 12.  Kansas, Missouri, and Rutgers all were a part of a 1993 push but the Jayhawks and Tigers stuck with the Big 8/12 and Rutgers stayed in the Big East.

Things remained quiet in the early 21st Century.  The BCS started up and were divvying out national titles left and right.  The Big 10, specifically Ohio State, was in the running for a few of them, but always came up short.  Some would say a lack of a conference championship game coupled with the conference’s early schedule attributed to their poor bowl performances.  That didn’t stop the conference from launching their own network, however.

In 2006, commissioner Jim Delany announced that the Big 10 conference, incorporated as a nonprofit organization in 1987, would partner with Fox Sports in creating an exclusive television channel.  At first many people scoffed at the idea of a conference run sports network.  Today, they are rolling in the dough with advertising revenue.  The massive amount of money now funds the expansion talk we heard last year.

Even though the fuel of a larger television footprint seems to be the primary reason that the Big 10 wants to expand, we discovered today that they were always looking, especially in the last 20 years.  Tomorrow we will dive deeper into the reasons why they are exploring expansion now.  No, it’s not just money.  That answer would be too simple.  Get ready as we connect the dots further to fill in this expansion puzzle.