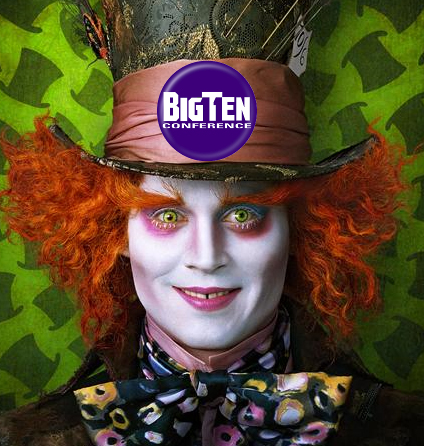 So here ware trucking through our Big 10 Expansion, running over our introduction and Big 10 history along the way.  Today our focus beams toward why the Big 10 wants to expand.  Like we said yesterday, money is a big part but not the whole pie.  Other slices include the silver bullet of television, the need to grow, scratching the itch that’s been bothering them the past 20 years, channeling baseball’s New York Yankee style of athletic competition, and the dust collecting on their trophy shelves.  Think of money as the crust that keeps the filling in the pie.  It’s alot to handle so we’ll try not to drive you crazy with the reasons.

Many of you know by now that the Big 10 Network launched with Fox Sports and took over the minds of every college sports fanatic quickly.  Michigan take on Ohio State in the Big House, but you are guaranteed to check out Indiana and Purdue.  Sure, it’s not everyone’s cup of tea but it worked.  We know they are rolling in the money this year and are spreading it out equally to the tune of about $22 million per team.  As we know with every television network (and wrestling promotion), the more territory you have the more eyeballs you can get on your product.  Inviting a school that’s not geographically in the territory gives the Big 10 more eyeballs.

Much like the television footprint, the need to expand is one of the top goals of any successful business.  Talk to any business administration graduate and they will agree.  Let’s face it.  College football is now a business, even more so than 20 or 40 years ago.  So in that aspect, the Big 10 is looking to grow their business and maintain profitability.  Their flagship product at the moment is the Big 10 Network so of course they are most interested in improving that product.  It’s a no brainer to try to build on their success.

Yesterday’s trip through time showed us that the Big 10 talked expansion for over 20 years ago.  They accomplished their feat with Penn State, now they are trying to add another team in the mix.  It might have been Notre Dame a couple of times and again the Fighting Irish are in the mix.  Who knows how long they have been looking?  In this day and age, news is almost impossible to stay hidden so maybe we are at a point where this process is finally public.  Even after this expansion wind blows over, the Big 10 will continue to look for even more expansion.

Baseball isn’t covered here, in fact it’s abhorred.  But it would be remiss of us not to point out how alike this Big 10 expansion is with Major League Baseball’s New York Yankees rise back to championship prominence.  Let’s go over their similarities.  Both entities fell off the championship map.  Then they started a television network.  After raking in some exclusive cash, they turned around and bought up the talent around the league. The flow of money and perseverance paid off for the Yankees, but will it pay off for the Big 10?  It’s obvious Jim Delany took a page from George Steinbrenner’s playbook (or lineup).

Where money is the oil that lubricates this expansion madness, we took a look at all of the parts of the machine that the oil runs through.  Ultimately money and power is where it’s at, but you get their by getting everyone watching you play, especially for a national championship.  All the while you can grow and stop the competition from ever contending.  The Yankees did it so we know it can happen.  It’s business 101 and the Big 10 practiced it for at least 20 years.   So how will it affect the other conferences?  That is another story….for tomorrow.