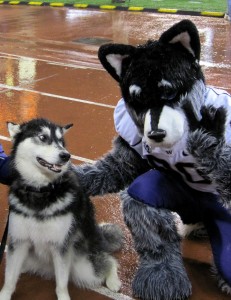 The University of Washington fielded a football team as early as 1889 but didn’t adopt its colors until 1892. “Sun Dodger” represented the teams after ‘Indians” and “Vikings” failed, but a student committee in 1922 voted to have Husky replace the Dodger. That same year, the Sigma Alpha Epsilon fraternity adopted the school’s first live mascot. Frosty was his name and being a sociable pup was his game. He came and went and a bunch of other dogs took his place leading up to today’s Dubs. 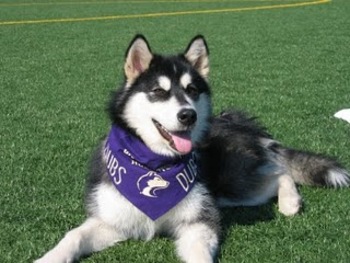 Dubs debuted in February of 2009, after rigorous rounds of internet voting. The Alaskan Malamute marked the first in a line of same named huskies that the university thought would help in mascot brand recognition. Tradition also played a big part. Just look at Georgia’s UGA. If you have the same name for live mascots, the recognition makes it easier to recall and thusly more appealing. And what a fine looking Alaskan Malamute he is too. Usually the only Husky I enjoy are the pants variety and seeing this statuesque pup strut his stuff totally doubles my Husky appreciation.

Let’s not forget about Harry. In 1995, officials decided that a live mascot was just not enough. They needed something or someone to fill the space when the Alaskan Malamute could not attend. Enter Harry the Husky. In step with anything public school related, it took two years of meeting, voting, and narrowing down the winning name that is Harry the Husky. With the advent Dubs we also had the advent of a new costume redesign for Harry. Way back in 2010, or two thousand and then, the university announced the redesign via my favorite medium: YouTube.

So let’s look at this fella. The old costume was gray and boring. Let’s face it. The new design looks more like the vaunted Alaskan Malamute than the previous one. Black ears, black and gray face, with gray arms and legs make up Harry’s get up. Much like other universities, Harry sports a football uniform when performing during games. The thing that throws me off a bit are the cartoon eyes. Usually husky eyes are white, right? Why are they blue? It doesn’t make much sense to me.

Too bad the University of Washington doesn’t give much love to Harry the Husky like they do Dubs. I like what they did on their official website in regards to dubs, but take a look a Harry’s page. Seriously? A link to an email address to have Harry the Husky show up to parties? Harry just had a major redesign, give him some love on your website guys. If a university has two mascot, at least make it equal. It’s only fair to fans of both types. 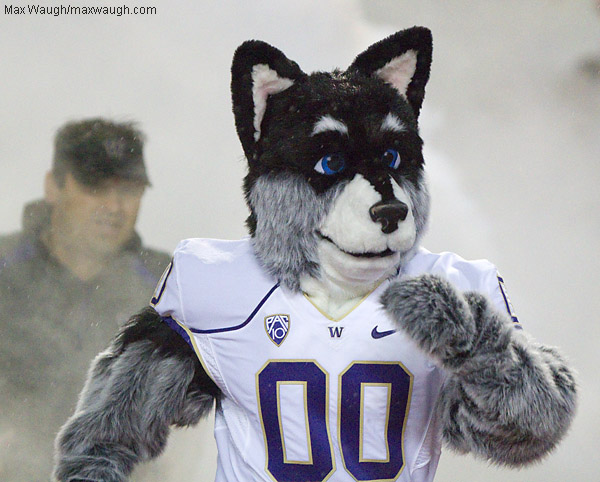 Alright, enough ranting. I love what they did with both the live and costumed mascots. It’s just some universities give equal representation in terms of gender related mascot, so I believe that the same should happen for live and costumed mascots. Dubs trots and struts in style and makes me long for the days when I could purchase Husky pants. Harry the Husky has a tasty upgrade but his blue eyes creep me out. Together they make a respectable but unappreciated (at least on the costumed side) team.