Another week of football and there wasn’t much to choose from Top 25 wise.  At least rivalry week kept the competitive juices flowing.  And per the Yeti’s lady’s suggestion, we were letting the juices flow at Jaywalkers.  It was an all day affair with a college like air, and we took full advantage of all they had to offer.  What hoped to be a great day of football turned into a great day of hanging out at the bar. 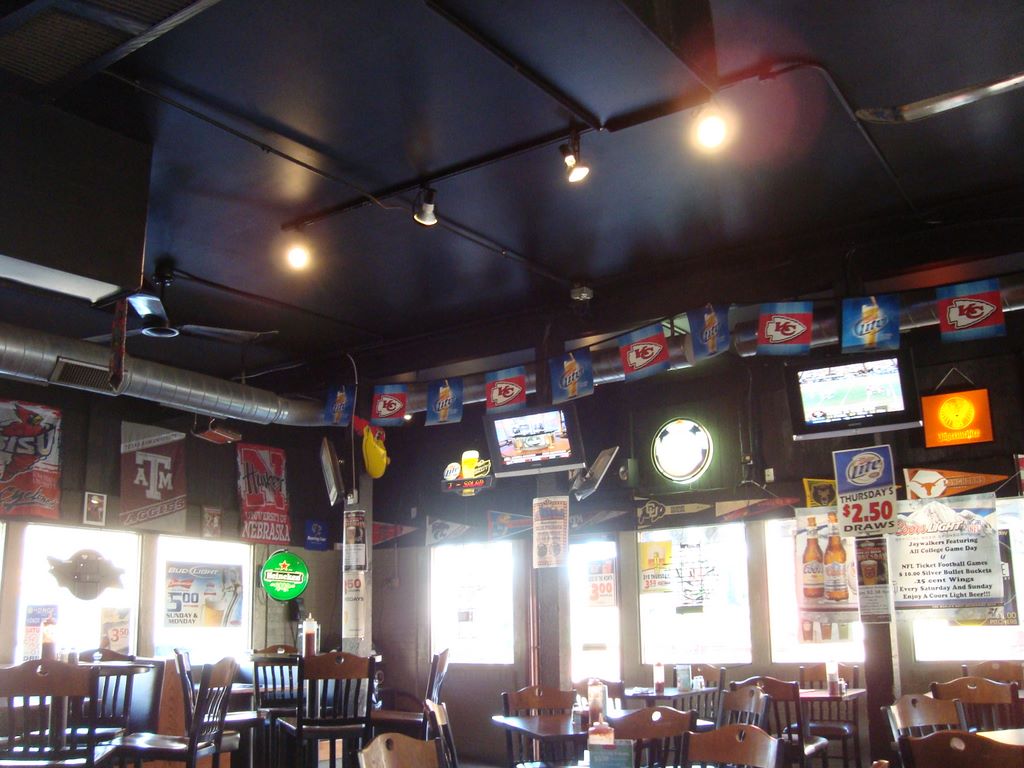 The first impression walking into Jaywalkers was that is as big as my parent’s garage.  It is a tiny bar.  They focus more on the front bar area than anything else.  There’s a patio out back and some booths/tables inside, but the two HD flat screens were right up front.  There were other TVs bolted to the support beams about the place, but they were the size of my computer monitor.  Because KCK still likes to light up, you can smoke indoors.  Thankfully, they had a satellite connection to accommodate the lack of big screen spectating. 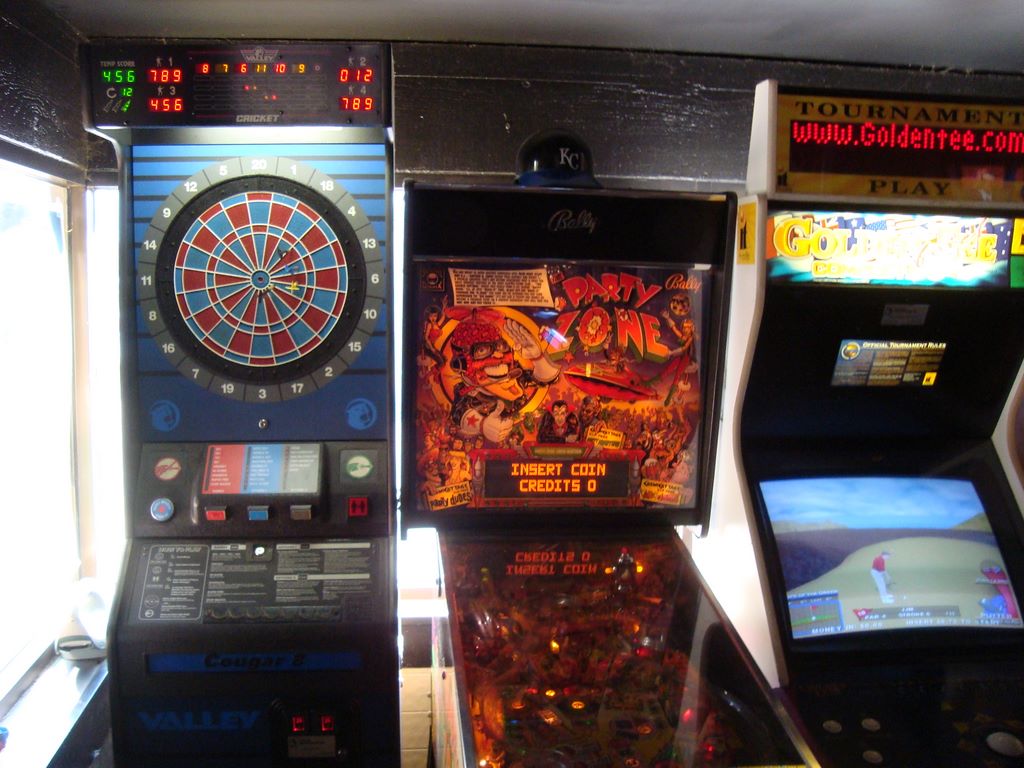 If the games end up blowing, Jaywalkers squeezed in some parlor games.  They had a row of games in the corner of the place next to the kitchen where you can enjoy darts, Golden Tee, and Silverstrike Bowling.  They even added a nice touch of old school by dropping o a pinball machine into the mix.  If that’s not enough for you, Keno helps with the other addictions fostered there. 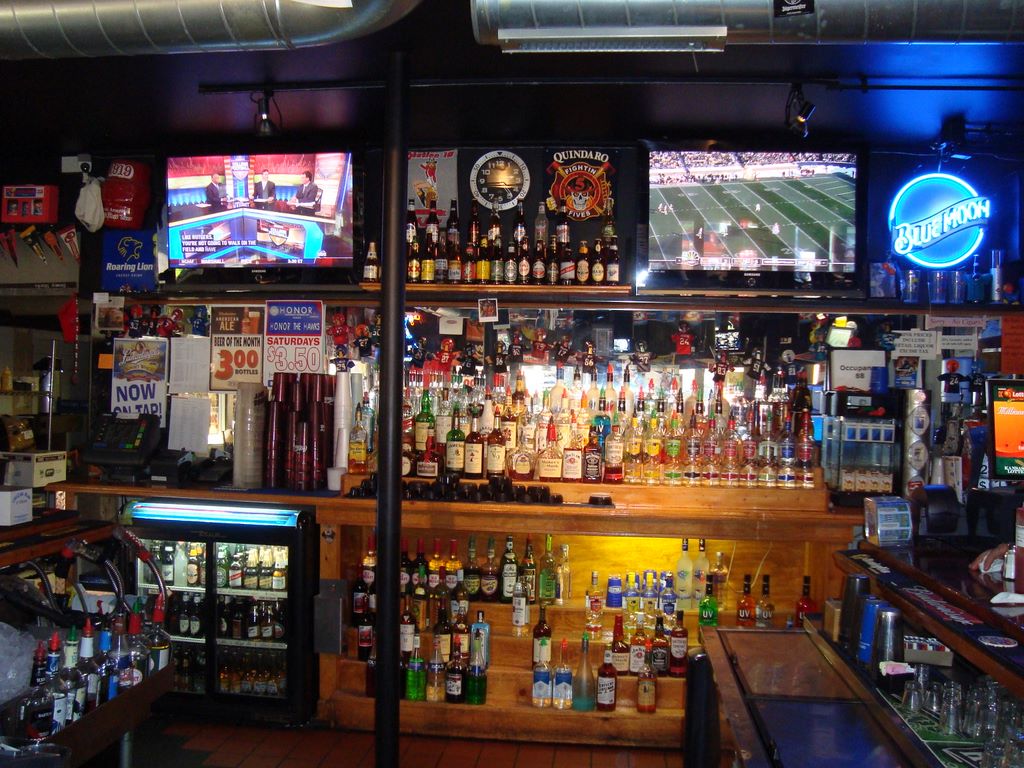 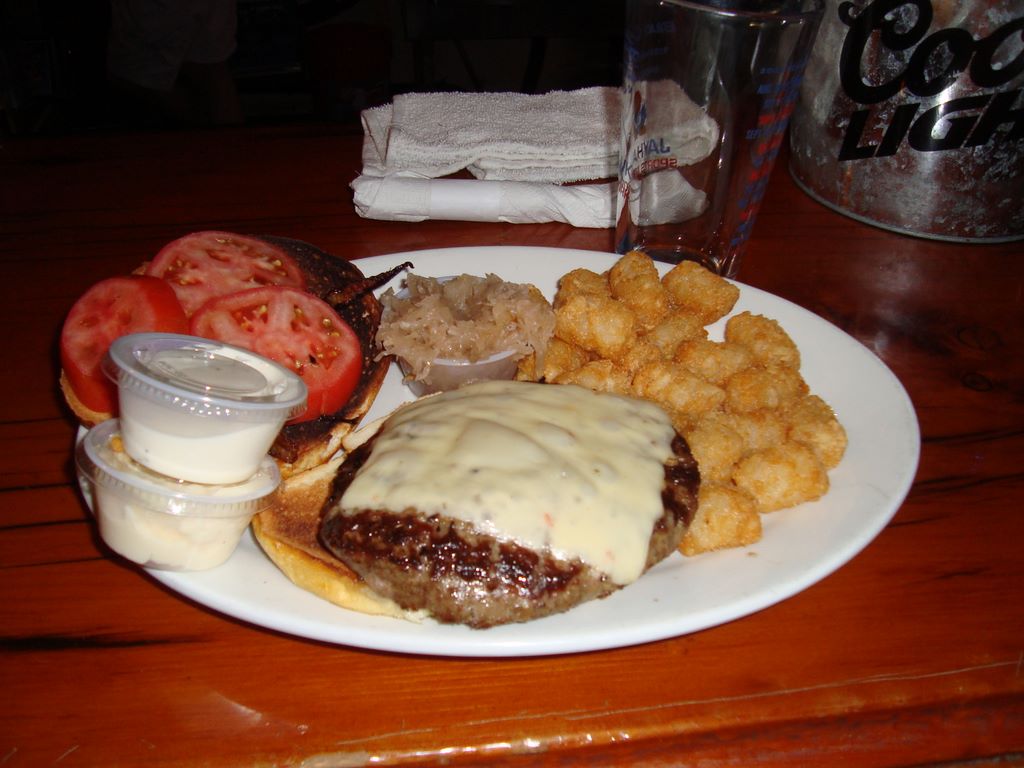 I expected Jaywalkers to be a full on KU bar, but much to my surprise, the bartender was a K-Stater.  She did a great job of hooking us up.  The drink specials were $2.50 for wells and $3.50 for calls, which reminded of my days back in college.  I lost count of the number of 25 cent wings that I ate.  Later on, the Build-A-Burger with a pretzel bun sat in my tummy all warm and cozy.  If you get a chance, build yourself one.

The build up to the big day really left us decompressed.   It was blowout after blowout.  First up, Ohio State blew up Michigan.  Next Florida blew up Citadel.  Penn State handled  Michigan State, Utah handled BYU, and TCU destroyed Air Force.  We didn’t see many close games that day, like Cincy over Pittsburgh and Oregon State over Arizona, but we were focused on the only two Big 12 matchups.

First up in the Big 12, Ron Prince took the field for the last time when Kansas State hosted the hapless Iowa State Cyclones.  It was a close game until the Wildcats pulled away in the third quarter.  The Wildcats held off a late surge by the Cyclones and won 38-30.  We here at the KCCGD are glad that Ron Prince walked away a winner, if but for a one game winning streak.  Where will he end up?  Who knows?  Who’s K-State’s next coach?  I’m sure we’ll know real quick.

The last game, supposedly the best game, pitted the Oklahoma Sooners against the Texas Tech Red Raiders.  Once the ball kicked off, it was massive blow out time.  Oklahoma up and down the field routed the Red Raiders and Mike Leech did not stand a chance.  It was a beat down of Kimbo Sliced proportions.  We stopped watching half the way through.  Now that the Big 12 South is all crazy, we get some more chatter coming up on who will go to the BCS title game in a month and a half.  Good job Sooners.

Jaywalkers reminded the Yeti of the times he huddled into Scoreboards in Aggieville to perch on a stool and watch football all day.  Jaywalkers truly waves its Big 12 colors high.  The games blew chunks, except for a great goodbye for Ron Prince, but the cheap drinks and tasty eats made it a great place to hang.  The other college reminiscing of a hangover followed shortly after our barspot.