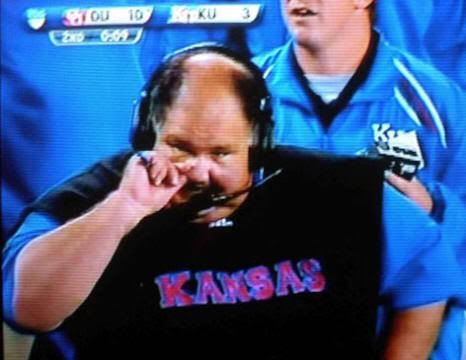 Hey, guess what?  We have games going on this weekend!  In honor of Mark Mangino we will only talk about the spreads that tip the scales in points.  Alabama and Florida are off the damn scale for playing powderpuffs on Rivarly Week.  What’s up with that?  Oregon State will roll over Washington State in the Pac 10.  TCU looks to feast on Wyoming and continue their BCS busting march.  On the same mid-con tip, both Houston and Boise State look to stuff their opponents.  Lest we forget about the Big 12, Mangino’s Kansas Jayhawks are a 27.5 point underdog to the Texas Longhorns.  Let’s hope he has plenty of Snickers for the sidelines.  Okay so we’ve gorged ourselves with fat jokes.  Hasta Pasta Mangino!