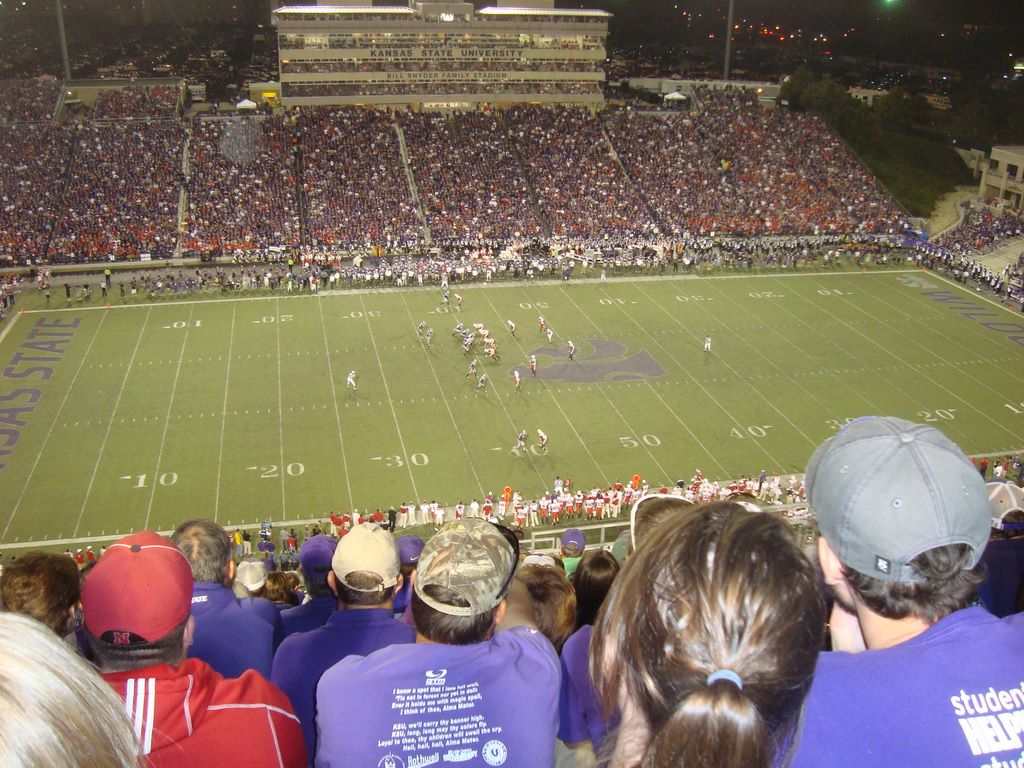 Me and my lady hit the road at about 2 O’clock to make the trip down I-70.  If you saw Saturday’s GameDay post, you’ll know why it was so quick.  On the way down, I tuned into some Sports Radio 810 WHB and Kevin Kietzman.  He’s been tongue in cheek about the game and he let loose the tongue to seriously knock on the ‘Class’ of Nebraska fans.  That got me and every other purple plated road traveler psyched up.  Kietz did a great job of stirring the pot and made me more than ready for the game. 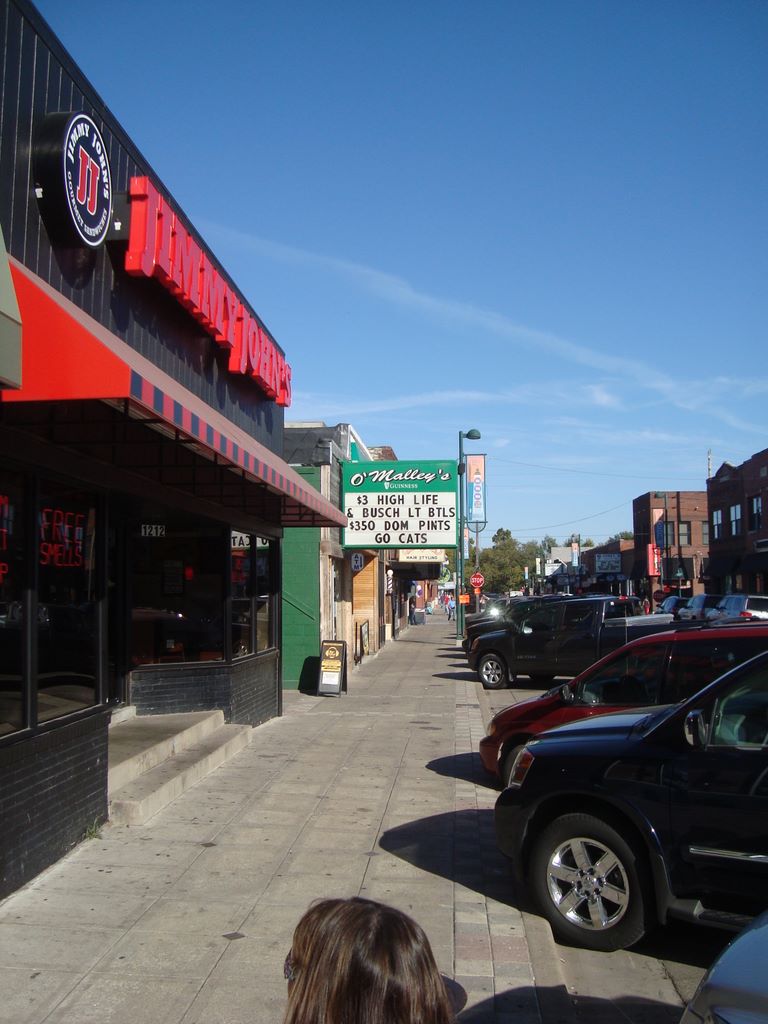 We dropped the car off next Aggieville when we got there.  The ‘Ville was just getting started for pre game and the fans were already out.  We dropped by Varney’s to check out the shirts but found none that sparked our interest.  Walking down the main drag, we made a couple of pit stops.  First we tried to hit up the Shot Stop but it wasn’t open until 7 pm.  So we went to O’Malley’s Alley and had the traditional Irish Carbomb to kick off the day’s events.  After washing it down with Samuel Adams Oktoberfest, we made our way to So Long Saloon for dinner.

But the Saloon was too packed and we needed to eat right away.  The next stop was the Hibachi Hut and I’m so glad we went there.  The pairing for the day was a twist.  Instead of beer we had Sangria, as a carafe of it was on special for $5.  To help enjoy the fruity flavor of the drink, I opted for the red beans and rice platter.  I forgot just how great the Cajun food is at the Hut.  The andouille sausage laid on top of the stack of rice put the whole thing over the top for me.  If you want to match some Cajun spice, definitely give Sangria a chance. 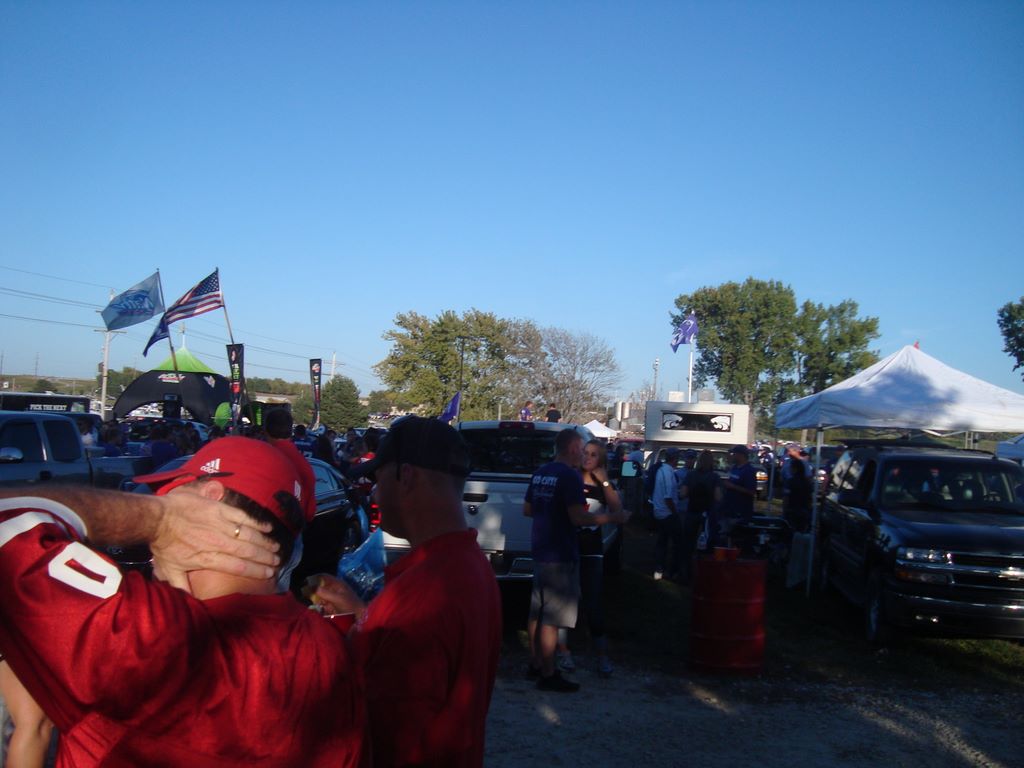 Now that we were full from the Hut, it was time to head to the game.  We got there fast enough to wait forever for the port-a-potty in the tailgate lot.  The tailgating was in full force with Nebraska fans and Kansas State fans mingling amongst each other.  The great thing about college football is that everyone can agree that tailgating should be shared by everyone.  The potty break took forever, however, and it almost made us late for the pre game activities.

We got to our seats just in time for the pre game festivities.  This time out, we had some paratroopers jump and land into the stadium.  The first flag was American, the second was the US Army, and the last one was a Big 12 Conference flag.  I made sure to cheer loud for the Big 12 flag.  Willie the Wildcat came out and did some Nebraska dude pouncing then K-S-U’ed his way off the field.  The band came on and did some formations and pushed the crowd over in excitement for the game to start.

So once the game started, it kind of went downhill.  Nebraska’s blackshirts were in full force and Daniel Thomas felt the brunt of it.  The Wildcats never really got it started.  On the offensive side of the ball, Taylor Martinez made the Wildcats look like a Pee-Wee league team.  If that guy gets just one sliver of daylight, he’s gonna take it and be gone.  After seeing him up close, I can say that Martinez is the #1 candidate for the Heisman Trophy.  I don’t think he can be stopped.  Congrats again to Nebraska on the dominating win. 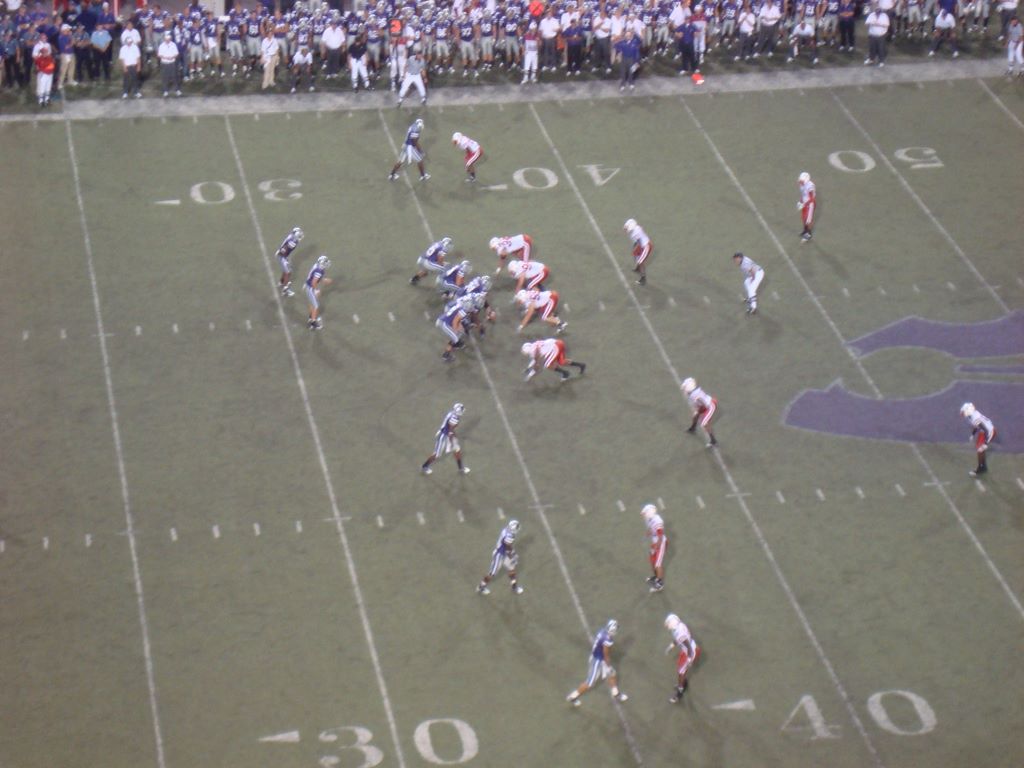 On the flip side, Kansas State fell back down to earth.  I’m pretty sure Bill Snyder 2.0 doesn’t believe to much in his offense outside of Daniel Thomas.  Carson Coffman is, was, and will always be just average.  No offense to the guy, but he just doesn’t have the tools.  He’s doing the best he can.  It didn’t help that #1 receiver Brandon Smith got inured early and didn’t return to the game.  Bill Snyder 2.0’s coaching decisions didn’t help Coffman out either.

Bill Snyder 2.0 is a legend and I wouldn’t have any other coaches for the Wildcats.  But I can’t help but think that he wrote off the game before it even started.  On the opening drive, and it was an honest to goodness drive, he went for it on 4th and 2 by giving the quarterback sneak to Coffman.  Not to Daniel Thomas or William Powell, but Coffman.  He’s been making some weird decisions in the first half for the last couple of weeks, like the fake field goal against UCF.  I’m not sure where he’s coming from.

But it wasn’t just that.  It seemed like every time the team lined up in a Wildcat formation, the Cornhuskers would scout it out and tackle for a loss.   The point of the Wildcat formation is to have a running back toss it a couple of times.  I was waiting all game for Daniel Thomas to step back and throw one over the top.  It never happened.  The kind of surprises you would expect from a Snyder 2.0 coached team didn’t happen.  It’s probably more to Nebraska’s tough defense, but I’m thinking maybe Snyder lost a mental step or two.  He’s still the guy for me, though.

We left in the middle of the game when Coffman kept coming back onto the field.  We were hoping for some extended looks at the backup position but it never happened.  So we hit the road and took the long drive back on I-70.  It was kinda cool to see all the red lights ahead of us as the migration back to Kansas City was in full force.  Kansas State didn’t win the last game against Nebraska and if you look at the 99 years of the series, it makes sense.  At least everything surrounding the trip made it more than enough to enjoy.