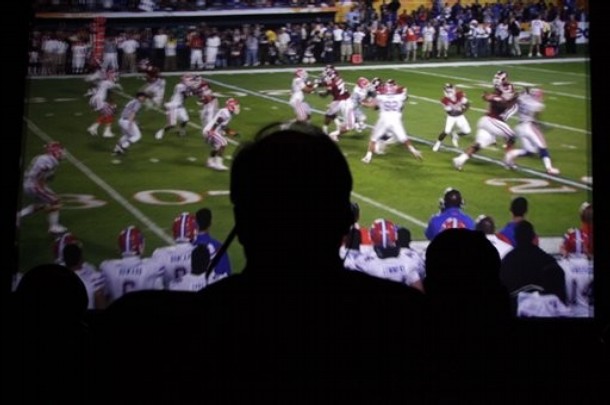 You know, I came down to Austin for a new job and now I’m trolling town trying to find a place to watch my Kansas State Wildcats.  The initial feeling I had coming from Kansas City was that it would be almost impossible to watch a Big 12 ‘North’ team down here in Longhorn land.  This whole fist month of college football for me have been about expectations.  I think after today, it’s safe to assume that I can watch my team just about anywhere in Austin.

The first couple of weeks for the season, I was either out of town or down some kind of bbq streaming party.  It was only in the last two weeks that I put my assumptions to the test and braved the sports bar scene deep in the heart of Texas.   So far, it’s been way more than accommodating.  Maybe it’s because I’m a Kansas State fan and not a Texas A&M fan.  Who knows.

But what I do know is that towns with a steeped tradition of college football respect fans from across the nation.  I’ve seen alumni groups from all over the country already joining in the spectacle at every place I’ve been to so far.  In hindsight it seems that I was foolish to think that the perception of Texas from Kansas City’s view would result and a terrible time of football watching down here.

Frankly, I’m relieved.  Yeah there’s egg on my face about the small minded assumption I made, but I always say that if I’m wrong then I need to be wrong for the better.  And the better may be down here in Austin.  The passion I’ve seen down here for football seems to be more electric than up in Kansas City.  Now, it may be because there is just a little bit more tradition of football than up in Kansas City where it leans to basketball.

It doesn’t matter.  What matters is that I’ve watched some great football with friends and fans up in Kansas City and my greatest fears are alleved down here in Austin.  Really it’s not that bad.  It’s a quiet respect either from the passion of my Kansas State football fandom, or the quiet respect of the fact that Kansas State has actually beaten Texas more times than not.  Whatever it is, I can say that it’s a blast watching my team down here in Austin.